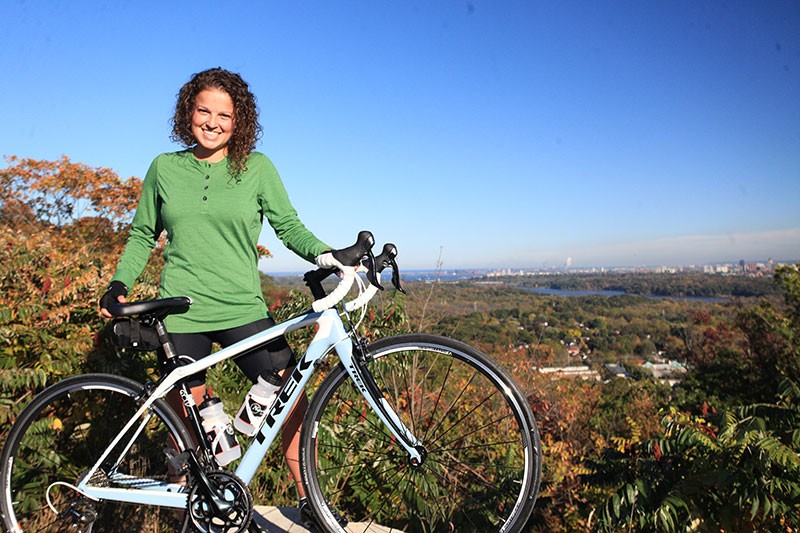 Danielle Berman knows mental illness’s devastating toll first-hand. Her father, Dr. Les Berman, died by suicide 15 years ago, and as a teenager she struggled with depression. Berman is now reaching out to help others in a big way. Starting July 15, she will cycle from Vancouver to Hamilton to support mental health awareness.

Berman recently received her Master of Social Work from Yeshiva University, and is professionally and personally devoted to the cause. “We need to stop viewing mental illness as a choice,” the Dundas native says. “It’s just like a physical illness. It’s not chosen and you’re not doing it to get attention, or because you’re lazy.” To battle these negative stereotypes, which inhibit ashamed sufferers from seeking help, Berman is calling her initiative Ride Away Stigma.

Her bike ride idea was inspired by the healing power of the outdoors, the opportunity to raise awareness in different communities across Canada and, most personally, the fact that her dad was an avid cyclist. In tribute to her father, she will be starting and ending the journey on his Cannondale bike, which he rode for the World Masters Games in Denmark in 1988.

Berman sees biking as a way to more intimately connect with local communities in her travels, including local Jewish communities. “I’m using this mode of transportation to have opportunities to meet locals,” she says. “I’m not just skipping through.” She’s inviting local cyclists to ride along with her for different legs of the trip. Berman invites Hamiltonians to join her on September 7, when she’ll complete her journey at Dundas Driving Park’s monument to victims of suicide.

Berman is regularly training with a cycling coach, but the challenges are emotional as well as physical. “It was hard at first, because every meeting was regarding my dad and losing my dad and my own struggles, so a lot of memories were coming up,” she says. She has also had to overcome shyness: “In classrooms I would usually not speak and now all of a sudden I’m presenting in front of people, sharing my vulnerable moments. But knowing I was doing it for the benefit of others made it easier.”

“Through my struggles and through losing my dad, the community here has always been supportive,” she says. “I hope that people from the Jewish community will come out on September 7 to show support and I’d love for them to follow me along on social media and if possible to donate.”

Readers can donate, find out about sponsorship opportunities and follow Danielle’s progress at www.rideawaystigma.com.