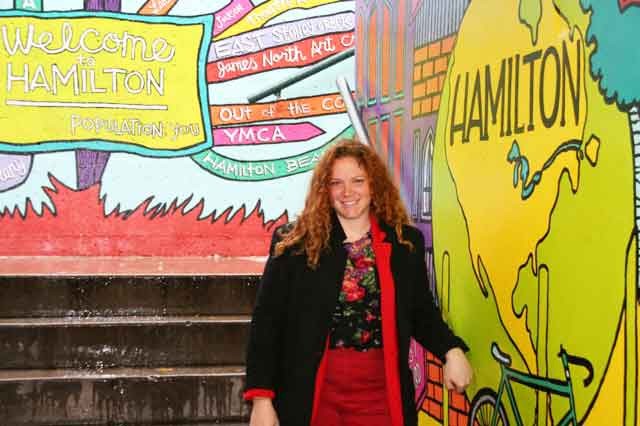 Melinda Richter never could have imagined that at the age of 28,  she would be moving back to Hamilton and actually be excited about it. Her story, up to this point, was not atypical:  Suburban (she grew up in Ancaster) high school graduate attends out of town university followed by a move to one of Canada's major urban centres. Richter received her undergraduate degree at Wilfrid Laurier University, a Masters in Religious Studies at the University of Toronto, and a postgraduate degree in Museum Studies at Fleming College in Peterborough. Last year she was living in Toronto and working a variety of part-time jobs at some of the city's arts institutions, when she started hearing about the vibrant arts and music scene back in Hamilton. Music and art were areas in which she had a strong interest, but Toronto is a place where you had to know the right people to get a break and Richter could never figure out who the right people were.

Hamilton, however, was an entirely different story.  While working on her Museum Studies degree, she  had volunteered at James Street South's Arctic Experience McNaught Gallery. This experience gave her some sense of Hamilton's art scene and the seed of an idea about a possible future here. A subsequent remark by a friend, who compared  Hamilton to the Wild West, where a person could pretty much do whatever they wanted in a place with seemingly unlimited potential, fertilized the thought that maybe a move here was what she was looking for.

As things turned out, Arctic Experience owners Marvin Cohen and Janet McNaught provided her with the best reason to return - a job offer, involving promotions, sales and appraisals, and a special assignment to help them expand their gallery's appeal to a younger clientele.  Richter returned to Hamilton last summer and  rented a house in Westdale, a neighbourhood from which she can walk, bike or bus to work. In September, she curated her first show at the gallery, showcasing the art of Sari Richter, a fellow Hamiltonian and Melinda's first cousin. "She's one of the first artists we've brought in who's doing something that's really a departure for the gallery," said Richter, describing her cousin's work as  "youthful, energetic and vibrant."

Richter could have included herself in that same category as well as two other young people whose lives are inextricably linked to the revitalization of James Street North.

A graduate of McMaster University, Becky Katz, 26, teaches art classes at James Street NorthÕs innovative Print Studio and waits tables at The Brain, a popular nightspot across the street. KatzÕs art graces the pages of H Magazine, an album cover that was commissioned for Supercrawl and the subterranean walls of the MacNab Street tunnel.

Unlike Richter, Katz, 26, never found a reason to leave the city.

"I'd always thought about living in Toronto because that's the natural progression, but I never wanted to that badly," she told the HJN during a conversation at the Mulberry Street Cafe, on the corner of Mulberry and James.
"I've been living here all my life so itÕs easy to know everything. The rent is cheaper and people are friendly."

As for James Street North, it feels like a second home. "There's a real community feel to it -  It's an arts hub but it's also little Portugal - Every single place on this street is packed during Art Crawl."

Musician Jeremy Greenspan, 31, is on tour for much of the year with his successful Indie electronic pop band,  Junior Boys, but he still calls Hamilton home. His interview with the HJN took place at The Brain, one of James StreetÕs hottest night spots. Greenspan started this business when he purchased the building that was  the former site of a Drivers' Education School and, before that, a Portuguese-run clothing store.

"I live here for the obvious reasons," he told the HJN. "It's where my friends and family are. But beyond that, I think Hamilton's an exciting place to be. Because when you're involved in the arts, there's a lot of attention paid to people in terms of being seen, who they are, who their friends are, what kind of clothes they wear. In Hamilton all of that stuff becomes absurd -  so people who are doing art here are doing it for all the best reasons - because they have a compulsion to make art, not because they want success or to improve their social life."

Whatever the motivation, success is in the air - not only for local artists and musicians, but for the James Street merchants, who are reaping the benefits of the neighbourhood's revival. An unexpected encounter with the owners of Morgenstern's, one of the street's landmark institutions, made that clear.

"Since the artists have moved in, it has been very good for the neighbourhood," Mark Morgenstern told the HJN. "They've come in and made some changes. We think it's fantastic and hope that this continues."