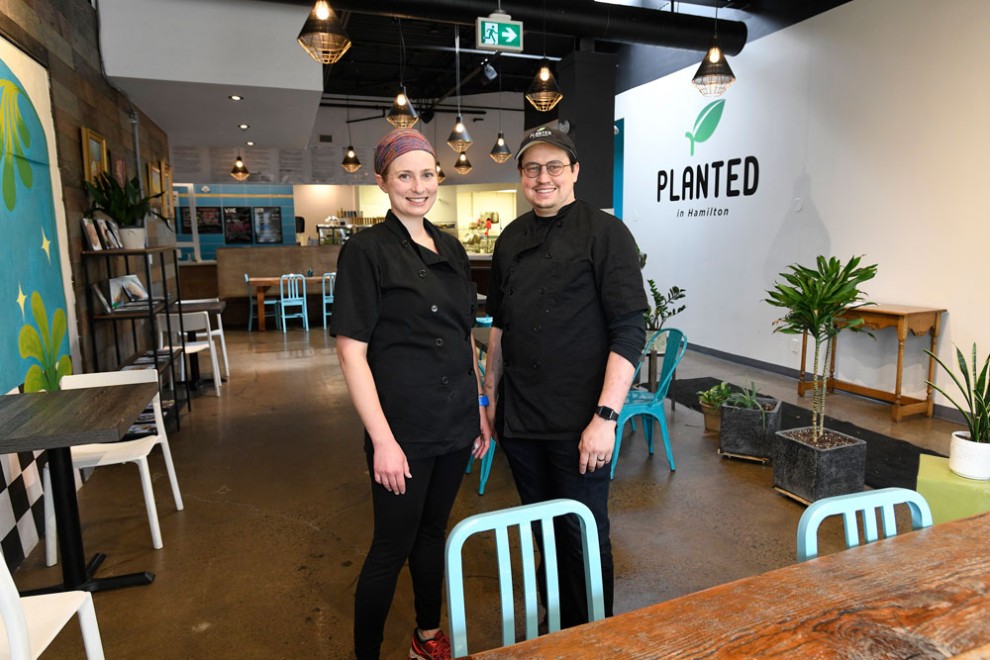 
Planted
John Street South
Planted owners Samuel and Emily Perry opened their John Street South restaurant in January 2018. The restaurant and bakery is plant-based, gluten-free and kosher. Its mission is to prove that inclusive food can feel familiar and taste amazing. Everything is made in-house, including sauces and dressings, burgers, salads, falafel and chickpea-based pastrami, cookies, cakes and other pastries.

“Our favourite reaction to get from guests is shock that what they’re eating is vegan/gluten free,” says Emily, who is also Planted’s baker. “Our goal is to provide an inclusive restaurant that could also be a gathering space. Pre-COVID-19, we had live music nights, cookie decorating parties, family yoga and hosted support group meetings. We’re so looking forward to getting back to that when it’s safe to do so.”

When lockdown began in Ontario, Planted scaled back its hours and staff. “When we were given the go-ahead to resume in-person dining, we gradually got back to a new normal, so to speak,” said Perry. When Hamilton entered the red zone in November, Planted opted to stop in-person dining, though they were allowed to have 10 people inside at a time. “It didn’t feel responsible, when the guidance was that people should only be leaving home for essentials. We make our living off people eating out, but we can’t pretend it’s essential.”

To meet the new demands, Planted is doing its own deliveries and has created at-home experiences, including Halloween cookie decorating kits, gingerbread house kits and fry-at-home latkes. “They hopefully provide something for people stuck at home to do and also supplement some of the income we’ve lost out on without a full dining room open,” says Perry.

Throughout the pandemic, Planted continues its commitment to help the Hamilton community. “Our community-mindedness is one of the things I’m most proud of about Planted,” says Perry. “From the beginning, we’ve partnered with community organizations through our Cookies for a Cause program.”

Each month, a staff member chooses a non-profit organization and designs a cookie. Throughout the month, 50 per cent of the sales of that cookie go to the organization. The month culminates with a live music fundraiser. “Of course, that’s not happening right now,” says Perry. “But during COVID, we’ve done a virtual dog food drive. We also try to be very mindful of the fact that we’re in a mixed income neighbourhood. Our staff is empowered to give a meal to anyone who comes in needing one.” 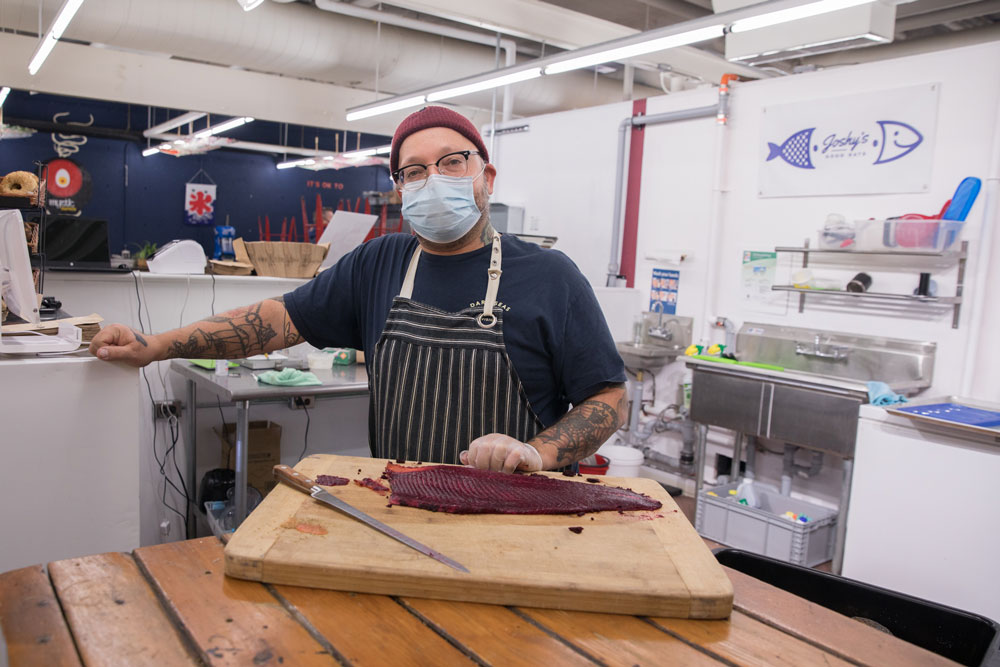 Who doesn’t feel happy when eating a bagel with lox and a schmear of cream cheese? While this belief is certainly shared by many, it is what led Joshua Charbonneau to create Joshy’s Good Eats.

Charbonneau cures trout and salmon and offers them up in delicious varieties like beet, Maryland Spice, lemon dill and pastrami spice. To complete the experience, he also sells additions such as pickled onions, sourdough bagels from General Bread and Pastry on James Street North and cream cheese supplied by Elite Dairy in Toronto.

A trained chef, Charbonneau lost his job at the beginning of the COVID-19 pandemic and thought he might as well take a chance on a new business, opening Joshy’s Good Eats in July. He was five years old when his grandfather taught him how to smoke trout and he has had a passion for it ever since. He was even general manager of Schmaltz Appetizing in Toronto, which serves smoked and cured fish.

Charbonneau’s passion is apparent as he describes his process for making gravlax. First, he washes the salmon fillet with Spring Mill Distillery gin. Then, he makes a crust from Diamond Brand kosher salt and brown sugar, which stays on for 72 hours. He then scrapes off the crust and applies spice mixes (Pastrami or Maryland), fresh dill and lemon or pureed beet. Charbonneau then slices it by hand and vacuum packs it.

Joshy’s Good Eats now has a stall in the Hamilton Farmers’ Market and supplies restaurants and markets in Hamilton, Toronto, Guelph and St. Catharines.

“When I started, my idea was, ‘be too small to fail.’ If it didn’t’ work, I could say I tried and just pack up and move on,” says Charbonneau, who moved to Hamilton from Toronto 18 months ago. ”The response has been fantastic. There has been huge interest and I have customers who come a few times a week to pick stuff up for their family.”

He said the pandemic is affecting how he operates, for example selling smaller packages of fish, since people aren’t entertaining right now. He laments that the holiday season would have normally been a time to go big offering party platters, but he is responding to the current situation.

“Small businesses are suffering. But if we figure out how to get through this and adjust to what customers need now, for example the smaller portions, we will get through it,” he says.

While he describes his business as a fish shop, Charbonneau thought it was important to add to the experience with offerings like bagels and cream cheese.

“When people walk through the market and see the stall, they are shocked and stunned and happy,” he says. “Who doesn’t get happy when they eat a bagel and lox? Whether it’s a Jewish kid from Pennsylvania or an office worker from Toronto, a love of this soul food makes people happy. That’s important, especially now, to have those little things that can make you smile.” 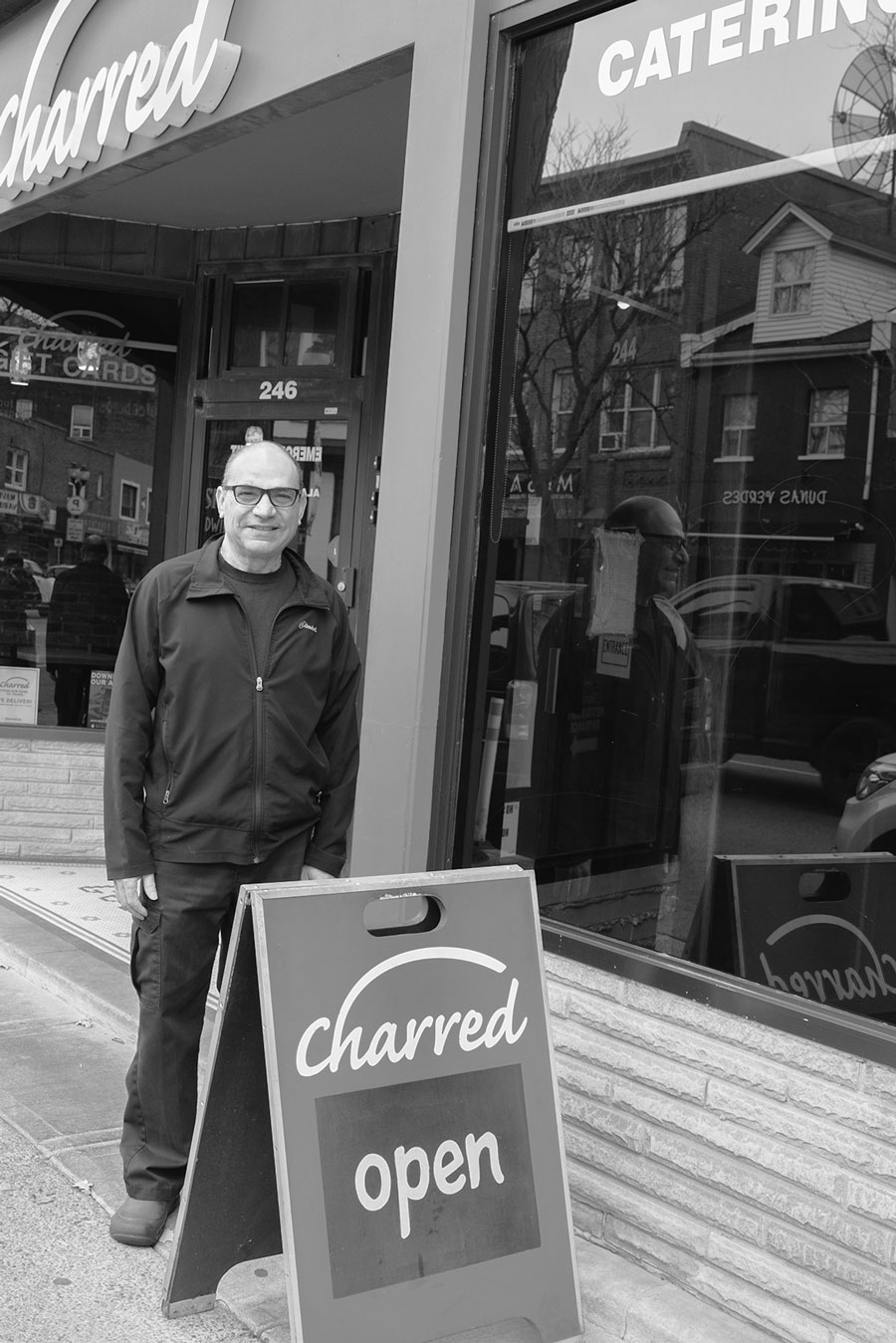 Back in pre-COVID times, it was the smell of Portuguese-style rotisserie chicken that would often lure passersby into Mark Morgenstern’s Charred on bustling James Street North.  In fact, that was precisely the idea behind Morgenstern’s decision to design his restaurant, which opened in August 2013, with an open kitchen as its central feature. It wasn’t unusual, Morgenstern told the HJN back in 2015, to see  customers pull out their cellphones to photograph up to two dozen chickens at a time roasting over a massive bed of hot charcoal.

When the HJN last spoke to Morgenstern in January 2015, he was filled with optimism about the James Street North renaissance and the positive impact of Supercrawl and the soon-to-be-opened GO station on his thriving business. Today, however,  a landscape of shuttered up stores and restaurants stands in stark contrast to those halycon days. And yet, Morgenstern is not complaining. Unlike many of the neighbouring restaurant owners, he owns his building, and take out and delivery was always a big part of his business.

His neighbours, on the other hand, are having  “a tough tough time.”

“All these restaurants are paying a good dollar for rent,” he said. “If you depend a lot on the wine and beer sales, it hurts if there’s no dining in ... So if people come to your establishment because of the drinks, then you’re in trouble.”

Morgenstern, in the meantime, is holding his own, thanks to online delivery services like Uber and Skip The Dishes, which account for a third of his business, while charging up to 30 per cent commission.

“I’m not making any money ... but on the other hand I’m moving product ... The worst you can do is to panic in times like this. You just have to try and figure out what’s the best way to keep going.”

To understand the optimism inherent in that statement, one need look no further than Morgenstern’s personal history. The child of Hungarian Holocaust survivors who emigrated to Canada in the mid 1950s, Morgenstern and his two sibilings spent their formative years on a kibbutz founded by their parents’ generation. Resiliency, you could say, is in their blood.

That’s why he makes a point of supporting local businesses, and encourages others to do the same. As for ordering in, Morgenstern says to order take out directly through his website, which bypasses online delivery services, and is an easy way to know you’re helping.