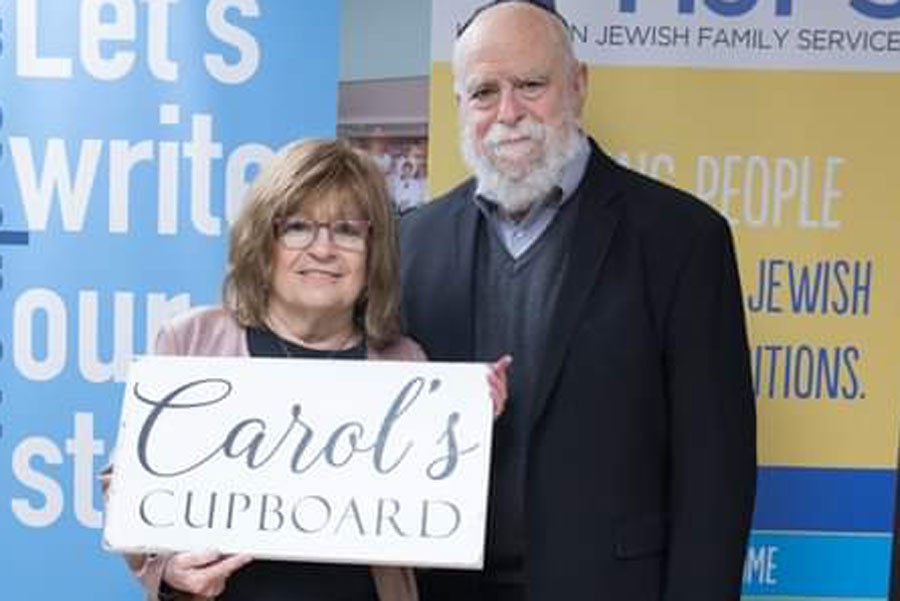 Sunday dinner was already on the table when the telephone rang.

In the home of Carol Krames that wasn’t unusual. People would call at all times of the day and night because they were desperate and had heard the executive director of Hamilton’s Jewish Family Services never said no to a soul in need.

The family reaction was always the same, recalled daughter Andrea Zians in a 2019 letter.

“As a child, our phone would ring at very odd hours. Usually, it was someone in need, somewhere in the city who happened upon my mother’s phone number.  There were Sunday night dinners whisked off the table before we could dig in because someone had called from the old Go Bus station on Rebecca Street,” she wrote. “The person was desperate, needing food, and on their way in town or out of town. My mother and father would meet them down at the bus station with parcels of warm food.”

A flood of such memories of Krames’ compassion was unleashed following Krames May 29 death.

A letter to Hamilton Jewish Family Services staff and volunteers was typical of the praise. (The name of the agency was changed from Jewish Social Services after Krames retired.)

“Carol served the community for more than 50 years with compassion, humility, and altruism. In her work … she exemplified the value of chesed. No one in need was ever turned away, and all were accepted lovingly by her.”

Christine Nusca, who worked with Krames for most of the 42 years she led Jewish Social Services, recalled her “kindness of heart and always wanting to help people. She would always follow the guidelines of Torah, she was very strong about that.”

Susan Roth was chair of the JSS board for several years and remembered Krames as a living example of Jewish values.

“She had tremendous energy, dedication and a real love of humanity,” she recalled. “A lot of that came from her own Jewish values.

In addition to advocating for Holocaust survivors and other vulnerable populations Krames is especially remembered for two accomplishments – helping a flood of Russian immigrants settle in the area after they were allowed to leave the former Soviet Union and the creation of the Hamilton Kosher Food Bank.

The food bank, affectionately called Carol’s Cupboard, was born in 1997 when Krames saw an unmet need in the community and, as she often did, simply moved ahead with trying to solve it.

Today the agency distributes 3,600 lbs of food a year and helps 75 families a month. It is the only kosher food bank west of Toronto.

Krames joined JSS in 1975, just as the former Soviet Union began allowing Jews to leave the country. Krames’ husband Lester recalled that on her first day of work “she had a line of newly arrived immigrants with all the problems related to coming to their new home without language. money, jobs or a place to live.”

Rabbi Daniel Green, of Adas Israel congregation, recalled those efforts in a 2019 letter supporting Krames nomination for a Woman of Distinction Award.

“These new arrivals required clothing, housing, education, financial aid, and acclimation,” he wrote. “The remarkable efforts of Carol became the example for others to follow in communities across the country.”

A special need for these people was to establish a connection with their Jewish heritage they had been denied in their native country. To help make that connection Krames worked with the late Rabbi Mordecai Green to organize a series of mass Jewish weddings for the new immigrants.

Boris Apel, of Hamilton, recalled how Krames was a rock of support when he arrived in Canada in 1989. That support included introducing him to his second wife.

“Carol was the first English-speaking person we met when we came here,” he said. “She introduced us to life in Canada and held our hands through everything we experienced.”

“She was always calm and helped the people who came here pick up the pieces.”

Apel said that help included counselling him through the end of his first marriage and then, one day, introducing him to a new arrival and asking him to show her around.

“When my family was crying for me, she was encouraging me,” he said. “That’s the kind of person she was.”

Krames met her husband Lester while they were both university students in Philadelphia in 1963. They married two years later and came to Canada in 1969 when Lester began teaching at the University of Toronto.

Initially a stay-at-home mom for their two daughters, Krames soon got a government grant to set up a mobile information centre in Mississauga providing people in need with information on social services, parenting and family advice and counselling women about education and employment opportunities.

Krames formally retired from JSS in 2018, but neither retirement nor illness would end her involvement with the agency.

In retirement she was a member of the Food Security Committee, helped plan the annual fundraiser, and was deeply involved in other events. She was also active in the Adas Israel congregation, a member of Na’amat and a volunteer for the Hamilton Hebrew Academy and chaired the English as a Second Language committee at Mohawk College.

Behind that activity was a 25-year struggle with breast cancer.

“Perhaps less known about my wonderful wife, is how she has battled health issues,” Lester Krames wrote in 2019. “In the 42 years she was director of JSS, the last 25 years she has been battling breast cancer.  This never stopped her from being who she was.  Her treatments never stopped her from feeling her responsibility for her clients and even after days of chemotherapy I would find her on the phone dealing with client’s issues.”

Krames was buried May 30 in the Adas Israel cemetery in Burlington. She is survived by her husband and children Andrea Zians (Phil) Simma Sudaley (Dovid) and Rabbi Yehoshua Krames (Malka).