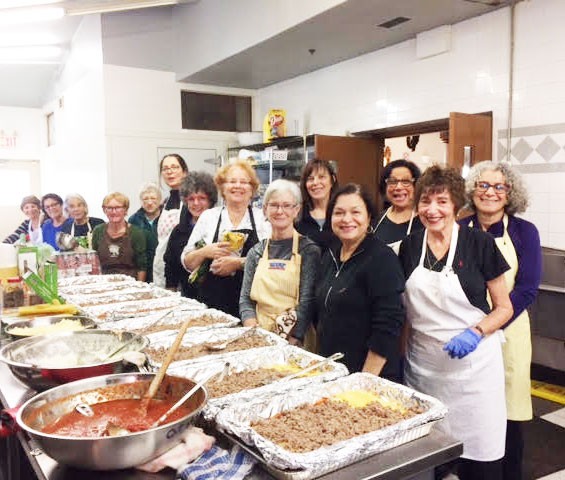 Feeding the hungry, clothing those in need, and providing shelter for the homeless are acts of loving kindness that are central to Judaism. That’s why we think that the Tuesday night Out of the Cold volunteers, who are living their Jewish values  in the most meaningful of ways, represent THE BEST OF JEWISH HAMILTON.

It’s Tuesday morning and the kitchen at St. Mary’s Church in downtown Hamilton is filled with the sounds of cheerful volunteers engaged in lively conversation while they prepare a beautiful feast for an expected 160 dinner guests.  At 4 p.m. the first guests start to trickle in and make their way towards a favoured spot at one of the room’s round tables. No sooner have they taken their seats before being offered a generous portion of buttered bread and a hot bowl of soup by another team of volunteers. By 5 p.m. every chair in the room is occupied by men, women and the occasional child, who catch up with each other while waiting patiently to be served by an army of volunteers.  The latter bustle back and forth between the serving station at the centre of the room and their dinner guests, serving up a delicious home-cooked meal with a smile. The dinner-party atmosphere is informal and relaxed, just like Cindy Richter likes it. Welcome to Tuesday night Out of the Cold.

History
Eighteen years ago the late Gloria Silverman, rebbetzin of Beth Jacob Synagogue, spearheaded an initiative to involve her congregants, and the Jewish community at large, in Hamilton’s newly formed Out of the Cold (OOTC) program. A passionate advocate for social justice, Silverman inspired dozens of men, women and young people to dedicate their Tuesdays  to feeding Hamilton’s hungry. Many of those who answered Silverman’s call are still Out of the Cold regulars after all these years. Among them is Cindy Richter, Silverman’s handpicked successor and Tuesday night OOTC coordinator for the last 10 years. Its location is a story in itself and best told by Richter.

“For 13 years, James Street Baptist was ‘our’ church. After its demolition, MacNab Presbyterian hosted us for a few years, followed by St Mary’s Catholic Church.” When St. Mary’s  became temporarily unavailable due to renovations in February, Christ’s Church Anglican Cathedral graciously offered their parish hall for the rest of the season. “Talk about the wandering Jew,” said Richter.

The Volunteers
The Jewish community OOTC roster includes 70 volunteers, divided among the Tuesday morning crew who prepare and cook the meal, the set up crew who set up the church with tables and chairs and everything else necessary in order to eat and drink, and the serving and clean up crew who work the late afternoon/early evening shift. In years past, when Tuesday night OOTC provided overnight shelter, there was also a breakfast crew who came in on Wednesday mornings to prepare a nutritious breakfast for the dozens of guests who stayed the night. Not all Tuesday OOTC volunteers are Jewish. Among them are Muslims, Christians, and McMaster students of various affiliations. Presiding over every shift is the ever-calm, ever-smiling, epitome of grace under pressure, Cindy Richter, who ensures that everyone has a task and no one is standing around without something to do.

The Guests
OOTC guests include single mothers, the elderly, the unemployed, the working poor, the homeless. Some may have a physical or mental disability; others may be battling a drug or alcohol addiction. Some are simply lonely. Collectively, they are the face of Hamilton’s poor. On Tuesday nights between November and March, however, they are welcomed warmly and treated with the utmost respect.  Here, they can enjoy an hour or two of good food, camaraderie and relaxation.

The Yiddishkeit
Tuesday night guests of OOTC especially look forward to the nights that coincide with the Jewish holidays of Chanukah or Purim, and who can blame them? For the former, there’s Susan Walman’s brisket on the menu, along with latkes and Chanukah cookies, not to mention dreidels on the table and the collective lighting of the Chanukiah.

On Purim, every guest receives a generous package of mishloach manot (gifts of food or drink that are sent to family, friends and others on Purim day), with instructions not to open it until they pass it to their neighbour to one side and receive another from the neighbour on their opposite side. That particular custom, wrote Richter in an email to her volunteers, “always solicits giddy laughter and, they LOVE hamantashen and Jewish food in general!” Hebrew school students are often included in the planning and delivery of holiday gift-bags of toiletries.

The Chanukah candle-lighting ceremony itself has, on more than one occasion, encouraged Jewish guests to identify themselves. “As our volunteers began to sing the blessings, a guest quickly joined us at the Chanukiah, and, with joy, he belted out the blessings,” wrote Richter in this year’s Chanukah missive. That same night another guest who was dining with her 10-year-old granddaughter took Richter aside, and revealed to her that she, too, was Jewish, and that all three of her children had become b’nai mitzvah. Each is married to a non-Jewish partner and no longer practices Judaism. She asked for a box of candles.

Funding
Hamilton OOTC includes 11 sites operating out of churches in the downtown core, Hamilton Mountain, and the east end.  As well, OOTC puts on a breakfast program six mornings a week from one single location.  Each site receives funding from a single source, replenished each year from fundraising initiatives. The exception is Tuesday OOTC,  which funds itself through the Jewish community’s generosity, in-kind donations and careful management.  “People give because Judaism puts such a great value on caring, not just for our own,  but for ‘the other’,” she said. Funds are put to immediate use towards food purchase. There are no paid staff members, including OOTC security, who are  volunteers from the Hamilton Police Service. “Just like the quantity of food for unknown numbers of guests who come through our doors miraculously appear,” said Richter, “funds miraculously are just enough to get us through each season.”

Cindy’isms
“Of all the things you wear, your expression is the most important.”

“By creating an atmosphere of community, OOTC is finding the light. Last night, I saw many examples. Volunteers calling guests by their names, or finding a moment to chat, or re-acquainting with a guest who has not been seen in a little while, welcoming new ones, going the extra mile when someone is struggling with bags or walker. You are all doing such a wonderful job.”

“When we shield ourselves from seeing the fundamental humanness of every other person, we actually become less human.”

“Worries go down better with soup.”

How you can help
Monetary donations to Tuesday OOTC can be made through Beth Jacob Synagogue by calling 905-522-1351.  Non-perishable food items and toiletries, warm gloves, hats and scarves can be dropped there as well. To follow updates about Tuesday Out of the Cold, visit their blog. To volunteer, email norma.jack.mail@gmail.com.

I feel like I get more than I give.
Rhona Rottman, volunteer

I can’t say enough about the food. You can taste the love that went into it.
Ralph, guest

I was dealt a good deck of cards in life, so it just feels good to help.
Oded Klinghoffer, volunteer

It’s pretty much the best meal of the week.
John, guest