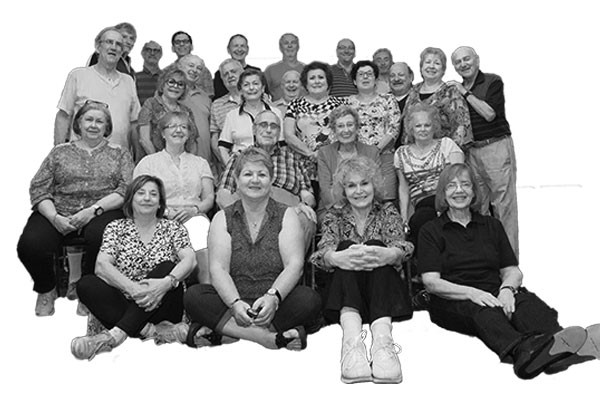 Jewish Hamilton is filled with hidden treasures — groups of individuals who find in each other’s company a sense of community and purpose. The B’nai Brith mixed bowling league is one of them.

How it started
As Manny Fine tells it, the mixed league came about as a compromise. The year was 1990, and B’nai Brith Canada had just voted to merge with its sister organization, B’nai Brith Women. Manny, who was then president of B’nai Brith International, was confident he could persuade the 70-strong members of the Hamilton men’s league to open its membership to women. He was wrong. “So here I am, president of the international association and I can’t control my own league,” he said. As Hamilton already had an existing B’nai Brith women’s bowling league, Manny proposed that a mixed bowling league be formed. “And that’s what we did.” Over time, the mixed league became the city’s dominant league.

Who’s who
At 87 and 85, Manny and Ruth Fine are the league’s elders. Balance issues made it necessary for Manny to stop bowling a few years back, but Ruth played regularly right up until last year. Thirty-something Jordan Guest is the league’s youngest member. Ernie Mason, who looks much younger than his 82 years, has been bowling since the early 1960s. “I’ve got a bad shoulder a bad back,” he said, “but I bring my wife, Dottie, because if she doesn’t bowl she doesn’t do anything physical. From that point of view it’s terrific. And there’s not that many activities in Hamilton that really takes place in the Jewish community.”

Vera Chaimovitz has been coming out for about 20 years. Her late husband, Mike, served a term as president.

“If you’d told me in my younger years that I’d join bowling I’d say you were out of your mind,” she said. Following her husband’s death, she stayed involved, even serving a term as president. “Bowling is a great social atmosphere,” she said.

Vera’s brother-in-law and current president, Moishe Chaimovitz joined the league with his wife Dorina a year after Vera and Mike. “Mike and I bowled (with the men’s league) on Wednesday nights,” he recalled. “Then we decided we’d rather spend the evening with our wives on Monday nights.” If a prize were ever to be given to the hardest working member of the league, Ray Greenspon would win hands down. The league secretary since its inception, he’s responsible for keeping members informed about score results and allocating prize money, a task much more complex than would at first appear.

Sharing the wealth
“One of the things we do right in this league is that we try to share the wealth,” said Ray. “We don’t want one person walking away with big money in prizes because they’re a great bowler while a less capable bowler walks away with nothing.” The prize money comes from a pool of funds accumulated from a portion of the $25 fee members are charged to play every week. Ray and Manny came up with a formula where winning players are only able to walk away with the most valuable prize they qualify for, conceding any additional prizes to the next qualifier. “So we’ll give you that prize and you will defer the other one so we can split the prizes amongst as many people as we can,” said Ray. “It ends up that most of bowlers in the league win something ...That’s kept people much more interested.”

Love story
“If it hadn’t been for bowling we wouldn’t be together.” That’s Lou Rottman, explaining how he and his wife Rhona met and became friends through bowling. Their first date took place about a year after they met when Rhona asked Lou to go with her to a friend’s birthday party. They tied the knot  in 1992.

Resident guru
Brian Kremer is the league’s resident guru. “He knows the game and he knows how to teach the game,” said Moishe Chaimovitz. Kremer has been bowling since the age of 18 when he bowled five-pin with the Grand Order of Israel. He graduated to 10-pin when he started working for Stelco in 1962. Because he worked shifts he didn’t start bowling with B’nai Brith until 1988. Kremer likes to tell people right away if he sees them doing something wrong. Like what, for instance?  “They’re trying to throw the ball. Once the ball leaves your hand you have no control over it,” he said, “so the idea is to bring your hand over the foul line and release the ball out in front. In bowling you have to deliver the ball.”

The banquets
There are some legends that never die—like the end-of-year banquets that used to take place at the elegant Dundas home of Sondi and the late Barbara Goldblatt.  “We had the best time doing it,” said Sondi, a youthful 78. “It was like yontiff all over again.” What did she serve? “You only wish you were there,” said Moishe Chaimovitz, laughing. “The guys didn’t eat anything the whole day before going over there.”

A family
“This is a group of people that call or send a card when somebody is not well,” said Moishe. “If something happens to somebody, the support is magnificent.” “The bottom line,” said Vera, “is that everybody helps everybody out. If you’re having a bad night, there’s always somebody there to let you know that you’re doing ok.”

Everyone welcome
The league meets every Monday night at the Burlington Bowl at 4065 Harvester Rd. and new members would be most welcome.

“It’s a beautiful way to spend the night,” said Moishe. “We used to have baseball. That died,” said Moishe. “We had the women’s league and that died. There’s a couple of very active mah-jong groups but other than that you have nothing. This is the last existing evening for a mixed group.”

“The bottom line,” said Vera, “is the fact that even though there’s a disparity of ages ... you don’t feel the age spread. And that’s really, really nice.”

For more information about the B’nai Brith mixed bowling league, contact Moishe Chaimovitz by email at mchaimovitz@cogeco.ca or call 905-516-5599.