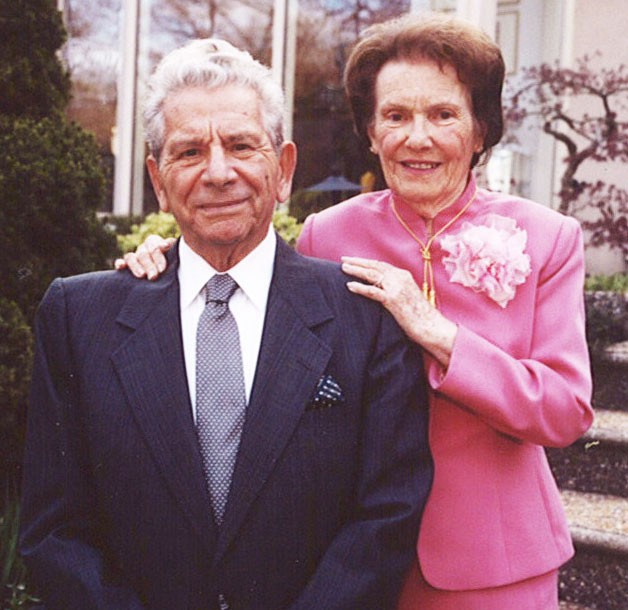 By Julia Kollek, Special to the Hamilton Jewish News

Margaret and Arthur Weisz may have arrived in Hamilton with a toddler and a small suitcase, but they built a successful dynasty and created a remarkable legacy.

During the Second World War Margaret and her family were taken to a ghetto near their home town of Moson in Hungary. Within a month they were sent to Auschwitz. There the notorious “Angel of Death”, Dr Josef Mengele, divided Margaret from her mother and younger brother, and she never saw either of them again.  Margaret spent the rest of the war crying every day as she worked in the Birkenau munitions camp.

Arthur lost both his parents and was taken to a labour camp in Hungary. Of the 1,000 men encamped, he was one of only 30 who survived. He was barely skin and bone by the end of the war. He and Greti (as he affectionately called her) were childhood sweethearts and newly weds, neither knowing if they would ever see each other again.  But they did. On her release, Margaret tracked Arthur to a Russian prison camp in Central Hungary. She wrote his name on a package of bread and threw it over the fence.  Against all odds, Arthur found it and the couple was eventually reunited.   They returned to Moson to find only 50 of the original 500 Jewish residents had survived. Undeterred, they began rebuilding their lives and had Tom, their first child, who was also the first Jewish child born in the town following the Holocaust. Arthur turned his business acumen into creating a wholesale grocery business.    When Hungary was taken over by the Communists in 1956 the recent success of the family company placed the Weiszs under scrutiny, and so, in a daring nighttime escape that took them through forests and across rivers they fled the country, eventually  making their way to this country.

Safely in Canada, Margaret cooked for boarders and Arthur worked as a construction labourer. When an on-site injury prevented Arthur from further outdoor work, he took a job in a real estate office. To find clients, he scoured the Hamilton phone directory for Hungarian names and built up a successful network. Within a short time he founded his own real estate company.

The family began establishing itself and a few years later Janet was born. Years later, when Arthur and Tom co-founded Effort Trust, they adopted the now-familiar elephant  as the company logo, because   — as Arthur liked to relate —an elephant never forgets a kindness.  Using Effort in the company name was no coincidence either, because to say Arthur worked hard would be an understatement.  After a day at the office, he would come home to Margaret’s delicious cooking and then continue working into the evening and over the weekend.

A man of strong principles, Arthur disliked greed.  At Effort Trust, his creed was to “leave a little meat on the bone”.  He was fair in his business dealings and people repeatedly came back because they knew they could trust him.   While Arthur built a business empire, Margaret took care of everyone on the home front with her legendary cooking. Popular and friendly, she made a point to say hello to friends and acquaintances alike at the many social gatherings the couple attended and was always impeccably dressed in her trademark skirts and high heels.   At home she created a family closeness many would envy, ensuring she and Arthur spent time with their children, five grandchildren and later five great-grandchildren.  Although a matriach, Margaret was far from the stern archetype — and was known for her sense of fun, even when she was terminally ill. At her funeral, granddaughter Danna Horwood told the story of how as a child she had rummaged through her grandmother’s wardrobe to dress up in red high-heeled shoes which at the time were obviously too big for her.  Sitting next to her grandmother as she lay in bed in her last days, Margaret — with a twinkle in her eye— suggested Horwood go to the wardrobe and put on the red shoes, which Horwood did.

After Margaret’s death in 2009, Arthur turned his heartbreak into an enduring memory of the woman he loved and the life they had shared. Horwood produced “Margaret’s Legacy”, a film for youngsters in which he and his great-grandchildren featured, recounting the story of the Weisz’s Holocaust experience.

Weisz died last April, at age 94. Temple Anshe Sholom was filled with more than 1,300 friends, dignitaries and business associates who came to pay tribute. His funeral cortege stopped traffic across the city he helped to build.    But the legacy he and Margaret created continues to nourish Hamiltonians. The family founded a charitable foundation that remains an important pillar of the Jewish community. Over the years Arthur and Margaret have been major supporters, not only of a myriad of Jewish organizations, but in  the wider community.    Margaret and Arthur overcame the traumas and losses they experienced to live life to its fullest; at the same time they created a legacy of generosity from which we all continue to benefit.