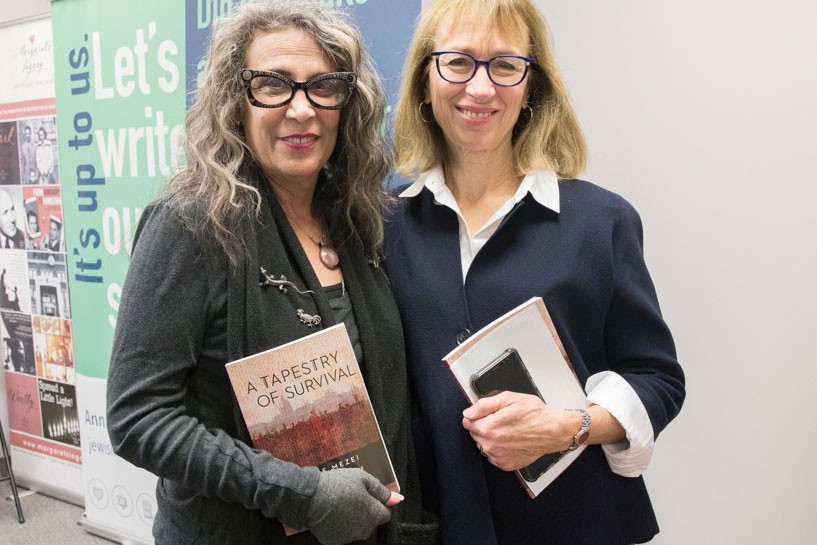 When I joined Hamilton Jewish Federation’s Holocaust Education Committee, I wasn’t really sure what I was getting myself into, though volunteering is an integral aspect of my life and certainly feeds my soul. I had volunteered with the committee at its annual student seminar on the Holocaust at Mohawk College, so I was aware that work was part of the deal.

Our committee was tasked with creating Holocaust Education Week programming for the Jewish community and public in early November. When I suggested  that we adapt a format the YWCA had used in a storytelling event where I was a participant, they embraced the concept. We were able to gather a group of five courageous women, all Holocaust survivors, who were willing to share their stories and experiences. We would use a small group format in order to create an intimate interactive experience.

We had told the survivors to anticipate approximately five to 10 participants at each table. To my delight and amazement, approximately 100 people came through the doors! As groups of 20 gathered around each table, our speakers took it all in stride as they rotated among the five stations every 20 minutes to tell their stories again and answer questions. As I circulated, I was struck by the interactions and intensity with which everyone listened to the stories.

The feedback I received was really interesting. People said that even though they knew the history, being able to ask questions of survivors shed new light on their understanding of the Holocaust and antisemitism.

The general feedback was a big thumbs-up and many people asked about future events.

I was delighted to see so that so many people from outside the Jewish community were interested in hearing the stories of these brave survivors.

The evening was a spectacular success, and would not have been possible without the enormous support of Hamilton Jewish Federation CEO Gustavo Rymberg and Elaine Levine. Thank you to the many volunteers and staff  who helped out the evening of the event. A special thank you to Liam Graham for filming and documenting the event.

It is our hope that this approach will encourage a wider audience to attend future events, and educating people about the Holocaust and racism will remind people of  our common humanity.

Robin Zilberg is an artist, public speaker, and the author of Borderline Me.

As I enter my 30s, I am in a process of self-discovery, exploring my history, my roots, where my family came from, and my identity as a young Jewish woman. My grandparents are no longer here to answer my many questions. I have been lost, until now. I had the absolute honour of being invited to “An Evening of Personal Stories,” hosted by the Hamilton Jewish Federation at JHamilton. Five incredible women shared their personal stories of living through the Holocaust.

When I walked in, I felt like I was home. Finally, I felt accepted and that I belonged. We all gathered around tables, eagerly introduced ourselves, and the stories began.

The five women are the strongest women I have ever met. Their stories were sad, yet beautiful; heartbreaking, yet wonderful. To hear their experiences of tragedy and survival was remarkable. They all spoke so eloquently, telling their stories and their truth, answering every question we had, and feeling safe to do so. While speakers went through different experiences and came from different family backgrounds, the one thing they had in common was that they survived the Holocaust as young, brave, and proud Jewish women.

I took in every word and left the event humbled and proud to have learned so much about who I am and where I come from, from each of the five speakers. They are  all incredible for living through and surviving such a significant piece of Jewish history. They are survivors.

Though my journey of self exploration has just begun, this was an opportunity I will never forget, that I feel blessed to have been a part of, and that has helped me tap into “who I am” on an extraordinary level. What an honour to witness true survival!