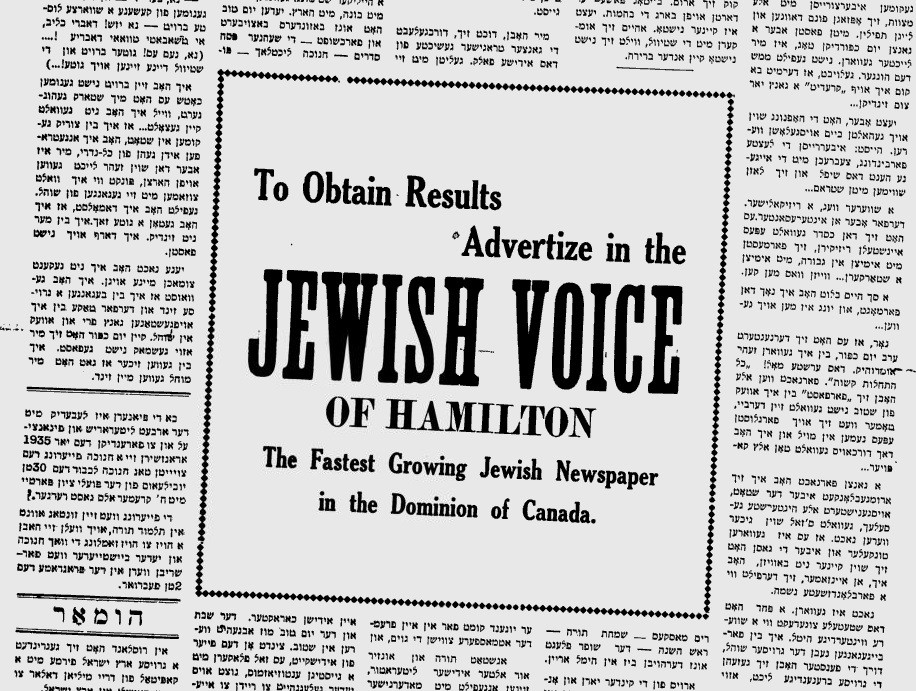 The Hebrew type used to print Hamilton’s only Yiddish-language newspaper will now be preserved at the University of Toronto’s Massey Library.

His son, Morley, and daughter-in-law, Joan, who arranged the donation, have worked to preserve Henry’s print legacy and the world of movable type it represents.

Balinson, who emigrated from Odessa, Ukraine, in 1911, was the heart and soul of the Jewish Voice of Hamilton. He wrote, reported, typeset by hand, ordered the cuts of the photographs, recruited advertisers and arranged for printing and distribution.

When asked if Balinson was religiously Orthodox, Conservative or Reform, Morley replied, “Labour.” Balinson was co-founder of the Hamilton chapter of the Arbeiter Ring, a Jewish socialist organization, and a card-carrying member of the typographer’s union. Yet he still knew enough about religion to argue Talmud in Hebrew with the local Polish priest.

Each issue included Balinson’s signature column, Mein shpatsir iber Hamilton (“My stroll around Hamilton”), which provides a panoramic window into the Hamilton Jewish community of the time.

One “stroll” takes Balinson to Beth Jacob synagogue, where he asks “our Great God to put an end to the war,” but is disappointed that “the rabbi was giving his sermon to empty seats.” In an ageless complaint, Balinson asks “Where are you, Hamilton Jews? What are you so busy with?”

Balinson witnesses a congregant shouting at the rabbi at Ohev Zedeck Hess Street Shul. He plays cards and bridge at the Arbeiter Ring. He argues with the principal at the Talmud Torah school. He reports on a fatal car accident involving members of the Grand Order of Israel (a fraternal lodge). He attends a meeting at Adas Israel synagogue, where a new set of officers is elected, followed by schnapps. Finally, Henry signs off with “Have a good year, and let us live to see the downfall of Germany, Italy and Japan. Then we will sing and dance.”

Domestic reporting was the paper’s focus, but the Jewish Voice of Hamilton did its part in rallying the community against Hitler.

In a 1935 issue, one of the paper’s occasional English-language pages features a call for boycotting the German Olympics, and that “the participation by any Canadian athlete in the Olympic Games in Germany should forever remain a blot on his name, a discredit to his team, a challenge of disapproval of Olympic Ideals in Canada!”

Jewish Hamiltonians’ dismay at fascism is also reflected in domestic political appeals, for which the paper provided a platform.

In a 1937 election issue, one candidate’s ad proclaims, “If you don’t want a Hitler in Canada, vote O’Hanley!” More cogently, a Conservative Party supporter argues that “chaos in Government in turn produces a new political system—usually a Dictatorship, and always under such a system the Jews have suffered greatly, as witness the situation in Germany,” so Jews should avoid voting for “new and untried parties” like the Stephansites, Social Credit or CCF (the precursor to today’s NDP).

As antisemitic persecution mounted, the paper’s call to action loudened accordingly. Joan notes “there was a very significant issue about fundraising for the war through the Red Cross,” which promoted a rally held at the Royal Connaught hotel.

The war hit close to home when Balinson’s son, Alexander, a Royal Canadian Air Force flight sergeant, lost his life over Malta in 1945.

Driven to despair, Balinson published an emotional front-page eulogy, lamenting that “since the time of Adam and Eve, a brother has killed a brother.” By eulogy’s end, Balinson vows to “break off my ties with the world.”

He was true to his word, as Balinson quit publishing the paper soon after. “I really think he had no heart to continue,” Joan said.

Henry died of a stomach hemorrhage at age 75 in 1961, and Morley inherited the print business.

In addition to her mission to preserve the Jewish Voice of Hamilton’s legacy, Joan expressed a larger desire to “preserve this whole industry of movable type that started with Gutenberg.” She noted a decline in appreciation for the art and craft of quality printing, of the kind in which Balinson and her husband specialized.

Yet there is some turnaround. Members of Hamilton’s arts community, like Mixed Media’s Dave Kuric, who helped to scan old issues, are interested in print as an art form.

Read a 1943 editorial by Henry Balinson.