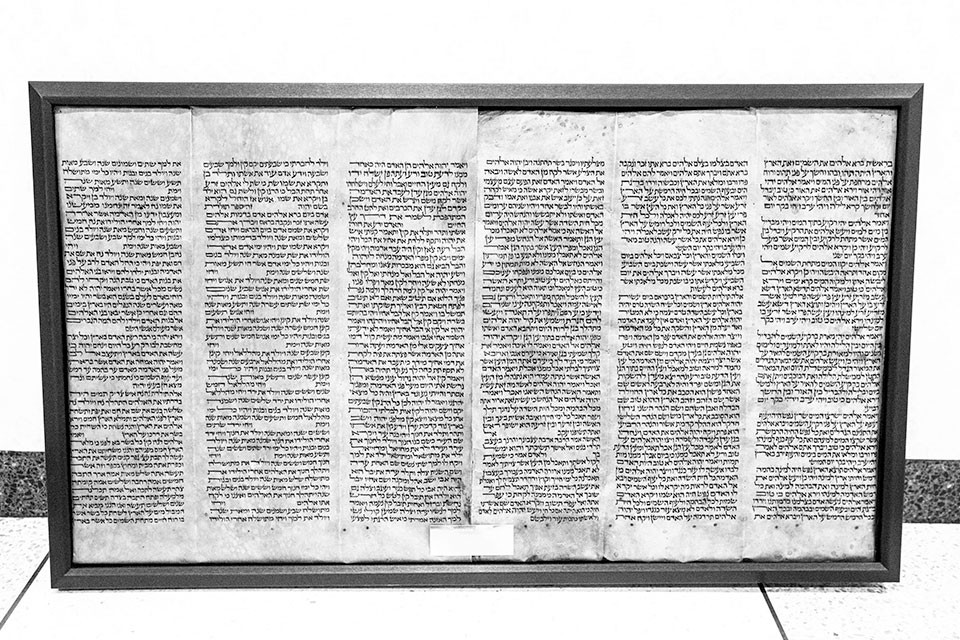 I attended the Shavuot morning service at Temple Anshe Sholom on June 9, 2019. During the Kiddush lunch following the service, I noticed a large framed object, possibly a painting, sitting on an easel at the front of the room. It seemed rather mysterious, as it was completely covered with a fabric. Nobody at my table talked about it, but I was very curious about what the object could possibly be.

After lunch, the fabric was removed and a rather impressive framed Torah fragment was revealed. Congregants discovered that it was donated by Joseph Scott, who is neither a Temple member nor a member of the Jewish faith.
Scott has been attending Torah study on Shabbat morning at the Temple since October 2018. He explained to the congregation how his gift came to be. I was fascinated with the story and wanted to know more. I realized there were two stories here—one about Joseph Scott and his involvement with the Temple and the other about the Torah fragment itself.

Scott agreed to meet with me so that I could learn more about him and his generous gift. From the beginning of his attendance, he has found Torah study to be personally and spiritually meaningful. He very much appreciates the learning atmosphere under Rabbi Cohen’s leadership.

Scott initially considered purchasing a Torah. The cost being prohibitive, he eventually located a Torah fragment online, from a seller in Israel. Scott’s next challenge was to have the fragment properly framed, and he was eventually able to do so here in Hamilton.

He decided to donate the Torah fragment to the Temple in order to show his appreciation by giving something back to the community. He showed it to Rabbi Cohen and then met with Cantor Baruch and they made arrangements to donate the gift to the Temple at the Shavuot service.

Rabbi Cohen says the Torah fragment consists of six sheets, or the first quarter, of the book of Genesis. The parchment is thicker than normal, and is uniformly dark brown, unlike a creamy colour typical of most Torah parchments. The reasons for this are unclear. In addition, the calligraphic style is unique and likely of Mizrachi origin.
The Torah fragment is a historical document that can be used for teaching, but since it is framed it cannot be used for ritual purposes. It was not accompanied by any documentation, but Rabbi Cohen speculated that it might be 150 years old.

When Scott initially showed Rabbi Cohen the fragment, the rabbi had no idea that Scott intended to donate it to the Temple.  During the fragment’s unveiling at the Shavuot service, Rabbi Cohen was visibly moved.

A plaque on the frame reads: Dedicated to all who have suffered discrimination, persecution, murder and martyrdom for revering God. “An attack on one faith is an attack on all faith” – Rabbi Jordan Cohen.

Barry Rosen is a member of the Hamilton Jewish community.