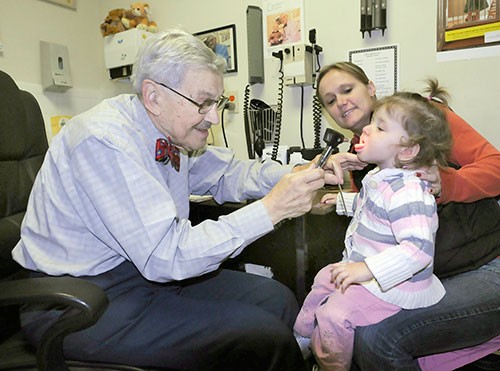 When I chose Medicine as a career and entered the University of Toronto Medical School in 1939, my motives to become a doctor I am sure were much like yours - based on a genuine desire to help people. We started with a class of 240 students. The next year there were only 123 men and four women.

In those post Second World War days when countless new discoveries were being made and used successfully, it was estimated that a doubling of medical knowledge happened every 50 years.  Since then it has exploded. In 1980 information doubled every seven years; in 2010 every three and a half years and in 2020 it is expected to be 0.2 years — just 73 days! The science and formal medical knowledge gives us the skills to make a difference in people’s’ illnesses and suffering.

But we all know that medicine is so much more than just the science behind the illness. It’s about people. You will have many memorable experiences from the patients you treat.

How times have changed since 1944. Despite our four female students sitting in the front row, one professor would stubbornly insist on greeting the class with “Good morning Gentlemen”. We look forward to celebrating the future careers of more than 50 per cent of medical school students today who are women.

Our class had 22 Jews. All were confronted with the University of Toronto hospital’s infamous “Jewish File”.  As a result, 13 of our 19 classmates who received post graduate training went to the United States.
Correspondingly, I began my residency in pediatrics at the University of Chicago, and  completed it as senior resident at the new Children’s Hospital in Honolulu, Hawaii.  It was Ben Sadowsky, a leader of the Toronto Jewish community, who helped change this discrimination. He was the father-in-law of our classmate Leonard Davies.  Ben was an aide to Vincent Massey during the First World War. They were stationed at Niagara on the Lake where Massey was head of the wartime prices and trade board. He later became Canada’s Governor General.They became good friends. Ben approached Vincent Massey when he was chancellor of the University of Toronto just after the Second World War.

Ben explained that there were no Jews on the staff of the University of Toronto hospitals.  They refused to take Jewish interns except for two at the Toronto General. It limited to zero the number accepted for post graduate training. Faculty membership was held at zero.

Massey said he was unaware of this discrimination, that it would be stopped ... and he did.  Let gender, colour, race and religion be of no consequence in selecting and promoting our medical students!

I started my community pediatric practice in Hamilton in 1949. I loved it so much that I only retired two years ago at 91. The last 15 years of practice were spent working at a clinic two to three mornings a week, mainly with immigrant and refugee children.

Remember I mentioned valuable patient interactions earlier?  In my heyday, I would make up to 15 house calls  daily. On one house call I saw one of the daughters of a professor at McMaster University.  I decided to visit her the next day as she had a high fever.  As I rang the doorbell and kept knocking at the door there was no response. On trying the door knob, it opened the door. There were four unconscious people in the home - carbon monoxide poisoning was the cause. I opened the doors and windows and called 911. The ambulances arrived shortly thereafter. All were taken to hospital and all survived. You can’t say house calls were not important!

In closing, I want to thank my wife Ruth for her companionship, love and support. We are celebrating our 65th wedding anniversary in September of 2014.