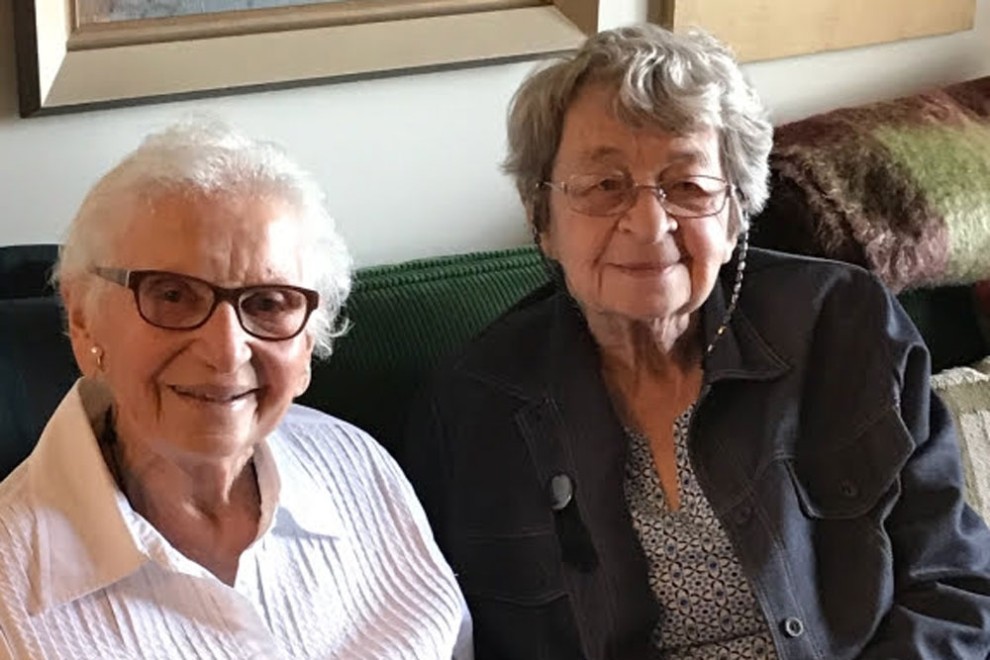 My lifelong friend Hanna was born 97 years ago in a farmhouse in Hlas, in the Bohemian countryside of Czechoslovakia. On Sundays, my family would walk three kilometres to enjoy coffee and cake with her family.

Hanna was always special. Her mother Martha, my mother’s sister, had a love for nature and a gift for writing poetry. Hanna’s father, my Uncle Hugo, a farmer like my father Karl Abeles, was genuine, honest, and a good farmer.

As there was no primary school near their farm, Hanna, at the age of six,  would alternate between living with us or her grandmother Sophie’s home across the road on weekdays. My sister Marianne and I would walk with her to the German school in town on a daily basis. When Marianne and I would  argue and snipe at each other, Hanna would cross the street.

When my father Karl led an exodus of his extended family to Canada in the fall of 1938, Hanna, her parents and her brother Karli were among them. We left only weeks before the Germans invaded. I was 17, and Hanna was turning 16.

During the war, Hanna and I found jobs in Ottawa reading and censoring letters from German prisoners of war and internees. Hanna was well-liked for her warm, sparkling personality. She became involved with Czech cultural activities in Ottawa and soon found work at the Czechoslovak embassy.

Recently, I found a copy of a letter Hanna wrote to the embassy, in which she informed them that she was regretfully quitting her job to marry John Faulkner, a German-Jewish emigré.  They lived in Shawinigan Falls, Quebec and Delhi, Ontario, before returning to Hamilton, closer to her parents’ farm. They had two children, Susan and Tommy.

Hanna’s house at 47 Vola Ct. on Hamilton mountain was small but comfortable. She lived there long after she and John divorced, tending her garden and her rockery and offering hospitality, good food and plum cake or cookies. We would sit together in the living room, whose shelves were lined with family photos. She volunteered for Jewish organizations, particularly ORT.

Although Hanna had many jobs, she never had a career. But, as a reader, she was well-informed and thoughtful. She attended classes and concerts. Most importantly, she was a genuine and good person. To give just a few examples:

Hanna’s mother-in-law had survived the war in Berlin, hidden by her housekeeper.  Despite her husband’s objections, Hanna brought her to Canada to live with them. She spent many hours sitting with her dear friend Minna Loewith at Shalom Village for months on end, when Minna was bedridden and no longer able to speak.

I always loved her, although my mother’s often repeated words, “Why can’t you be like Hanna?” still ring in my ears. Our cousin, Mizzi, had sent a container with her belongings to Canada, but she and her family perished in the Holocaust. Her belongings ended up being divided between Hanna and myself. Only recently I found out that Hanna, at great personal expense, had shipped her part of Mizzi’s furniture and artwork to Mizzi’s surviving relatives in Czechoslovakia. It had never occurred to me to do that.

No one who knew Hanna could come away untouched by the goodness that glowed from within her. As one of my grandchildren said upon learning the sad news, “Hanna was totally the nicest person ever.”

Wilma Iggers, 98, is a retired professor, and the author of several books and scholarly papers on the history of the Jews of Bohemia and Moravia.