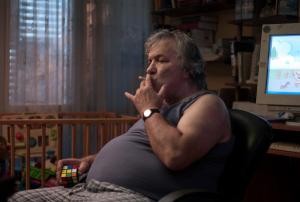 The welcome was great, the food was great, and yes, the films were great – ALL of them, but for really different reasons. The Israeli Film Festival, held in Beth Jacob Synagogue last month screened three films: “Dancing Arabs,” “The Farewell Party,” and ”Dr. Pomerantz.”

The first film, “Dancing Arabs,”  was the easiest to love, and my guess is that it was probably the most popular. The story of a young Arab boy coming of age in a fractious community was told with a lot of humour but no flinching. Pivotal moments of this boy’s life were indeed severely scarred and in the end caused him to persevere personally but abandon his identity, his family, his community. The characters in the second film, “The Farewell Party” were, in contrast,  at the end of their lives. They were coping with not just the inevitable death of a loved one, but also with watching  the dying person endure ongoing and inescapable physical pain. Standing by, powerless to ease the suffering, they were prompted to concoct their own solution to the dilemma. This process became, at times, hilarious even though the themes were topical and serious. It was the third film, “Dr. Pomerantz,” however, that I suspect was probably the least popular.  Like the first two, this film dealt with a serious subject and at times was just as hilarious as they were. But this was a film I would never, on my own, have chosen to watch. If I were channel surfing, I would instantly skip it. So, why then, did I not walk out?

In retrospect, I realize that initially the two things that put me off were the main character and the setting. The main character was unkempt – he was unshaven, overweight, poorly dressed, a slob. He was not someone with whom I would strike up a conversation – quite the contrary – I would politely sidle away from him if I found  myself in the same room with him or on the sidewalk waiting for a green light. The setting was his  apartment — a claustrophobically small, cheaply furnished, poorly organized box. If, inadvertently, I  found myself there I would want to exit immediately; its inhabitant was someone I would scramble to avoid at all costs.

As the film progressed, the viewers got a picture of Dr. Pomerantz. His wife had killed herself, his son had Aspberger’s  and he himself was working at a suicide hotline. He was a decent, well-liked man; he provided a home for his handicapped son and contributed to the community. Not a great life but things were going along until he fell victim to depression and himself descended into the netherworld of mental incapacity; he then transformed into a Charon, boatman of the Styx, accepting the payment of one gold coin for ferrying the dead across to the underworld.  As Dr. Pomerantz’s depression worsened his son took over the “family business”; at the end he became nothing more than a clownish carnival barker, collecting cash for a short, meaningless, midway ride.

The maker of this film, Assi Dayan, did inject humour, but it was indeed black — unrelieved black. Depression is not pretty and it is not sociable and for these reasons it is well outside my comfort zone and, I suspect, that of the general populace. Discomfort starts with the physical – personal appearance, physical setting. That’s why I change the channel or sidle away. This same discomfort mounts with the fear of social unpredictability. People who are seriously depressed are often beyond performing the smooth, often meaningless social niceties that we use on a daily basis to grease polite society along.

Depressed people are liable to respond in a manner that does not fit our formulaic conversational patterns; they can be quite loud, possibly foul, not really logical, and unreasonable. This is embarrassing to respond to. There is also the chance that they will not physically respond as our ingrained social expectations dictate; body language is a delicate issue sometimes beyond the control of the mentally ill. I am uncomfortable and downright fearful when I have to deal with this much social uncertainty and I avoid people who are likely to put me in the position where I might have to respond to their potentially embarrassing unpredictability. A good reason to change the channel. However, I sat through this film and now I have to deal with the emotionally painful aftermath.

Watching “Dr. Pomerantz” was not comfortable because it did not allow the viewer this escape. Assi Dayan put socially upsetting people front and centre in his film. The viewer could not ignore them or sidle away; he or she had to sit with his or her discomfort for 90 minutes. Where was all  my discomfort coming from? It came from evading in myself the next step to the discussion – the usually politely ignored, unspoken question – exactly where, on that so-called “continuum” was I?  Nobody, but nobody, ever asks that question in polite discussions. My discomfort with Dayan’s film effectively answered that question point blank – I was somewhere I did not want to be. And worse yet, I certainly did not want to admit it. Assi Dayan’s “Dr. Pomerantz”​ forced me to peg myself squarely on the line. Ironically, while the film itself offered no hope, it did indicate the direction in which hope could be found.  I have “Dr. Pomerantz”​ to thank for this powerful, disconcerting diagnosis. I may not have liked it, but at least there is a cure.