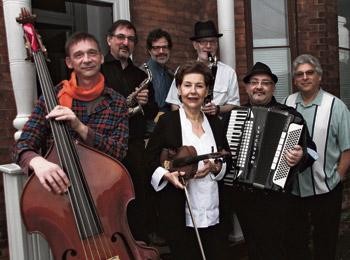 Abraham plays accordion for Touch of Klez, the Hamilton-based klezmer band that will be playing its tenth anniversary concert in April.

Of Indian Jewish descent, Abraham, 42, didn’t grow up listening to klezmer music. “Our Judaism is Sephardic,” he says. “It’s not part of our culture at all. I immersed myself in it but it was completely foreign to me.”

Ten years ago, Alan Livingston, the band’s guitarist, invited Abraham to participate in what started as an informal jam session at the Beth Jacob synagogue.

The then—long-haired Abraham is a classic rock fan, so klezmer was a hard sell. “I guess I just started studying it so I could understand what I was heading into. At the time, I remember listening to it and thinking, man, this is terrible,” he says. “There’s one good player who plays lead and all the rest of the guys sound like they’re drunk. But I came to realize as I learned more about it, that that’s the feel. It’s got this lilting feeling, and then you get into it, and start to understand what you’re listening to, and it’s amazing.”

Original bassist Michael Glogauer, who started the band, moved to Toronto. Another founding member, drummer Murray Adelman, passed away in 2011.

The current lineup features a wide range of musical influences and training. “David Ludwin is more of a classical fan, but the other guys came from rock,” Abraham says. “Ron is a big Beach Boys fan. Rick is also really into rock n’ roll. Charlotte was classically trained, and she does bring that. David Ludwin had only been playing for about two years when he joined the band.”

Rock n’ roll and klezmer may seem like an odd pairing, but Abraham perceives a similar spirit to both genres. “At the time, klezmer was subversive music. It was heavily regulated in most of Europe. In Odessa, for instance, there could be only four Jews in a wedding band” he says. “If you think of what was happening in music at that time, in Europe, it was Strauss waltzes, very subdued, very controlled. What klezmer was doing was like punk. The rhythms were heavy. It was pretty angry music.”

From ramshackle beginnings, the band has coalesced into a tight unit. “We’ve gone down to klezmer seminars and workshops, and had people come in and teach the band, and we’ve really become used to being musicians,” Abraham says. “It’s amazing to watch people find something in themselves that they didn’t know was there.”

Over their ten years together, Touch of Klez has recorded one album (they’re currently working on their second) and played a variety of shows around the Golden Horseshoe: from the expected weddings and bar mitzvahs to a Lutheran convention and a world bike race.

“The music talks to everybody,” Abraham says, and his own unlikely journey is good evidence.

Touch of Klez will be playing their tenth anniversary show at the Beth Jacob synagogue on Sunday, April 28 at 2:00 p.m.