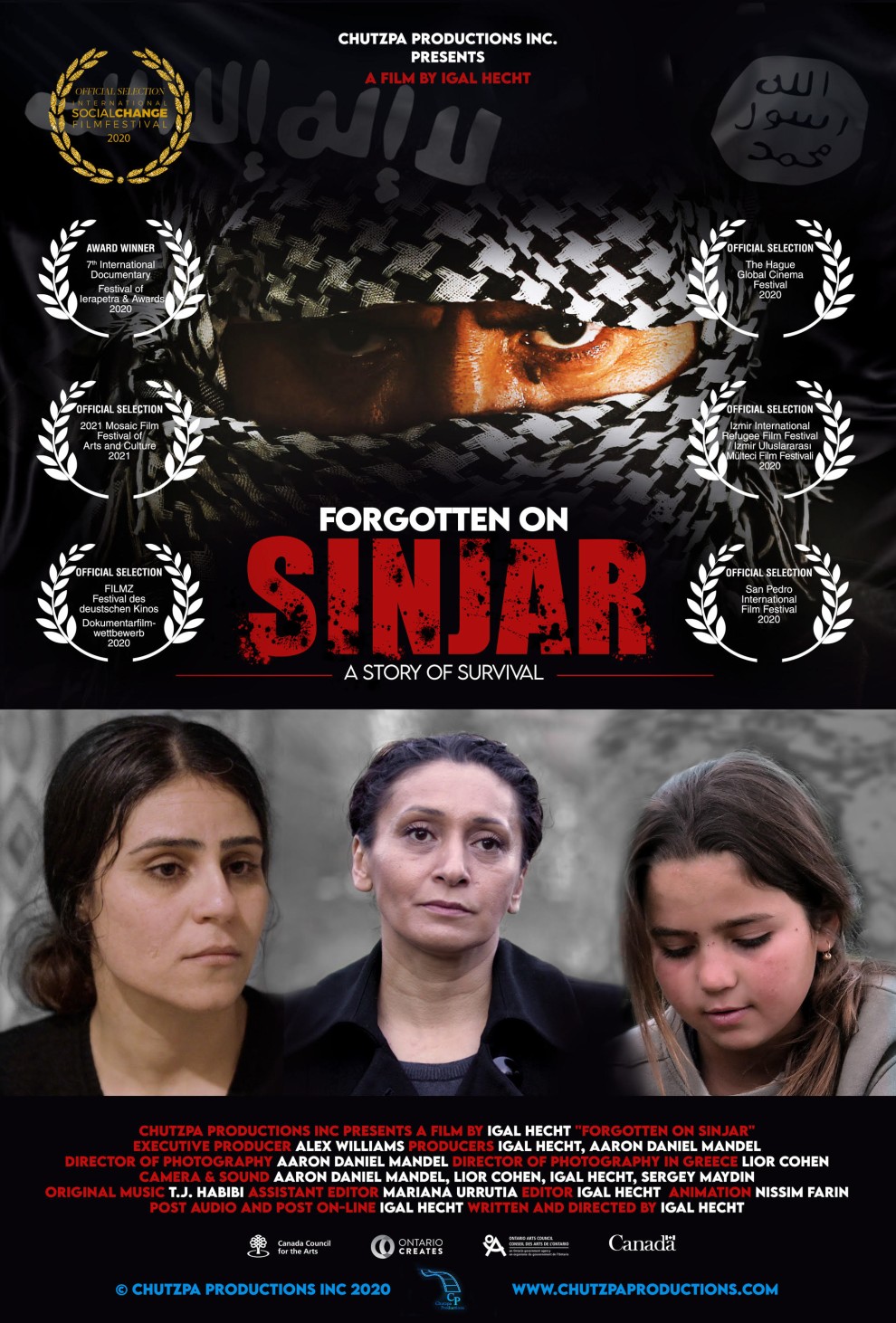 The nightmare began the day of August third, 2014.   ISIS militants attacked the Yazidis in their millennial – old homeland in northern Iraq. Thousands of men and older women were killed on the spot.  More than 360,000 were displaced in a matter of days. Some 50,000 fled to Mt. Sinjar, the holy place of the ancient Yazidi people, with just the clothes on their backs. Thousands of women and young girls,  some as young as nine, were raped repeatedly, sold as sex slaves and passed around to ISIS fighters.

Although the carnage was seen by horrified viewers on television, and the UN declared it a genocide , no one helped. Their  suffering continues, even after the defeat of ISIS. Thousands remain in  squalid refugee camps lacking food, water and heat. Daily they risk their lives, fleeing to Greece on rubber boats.  Many have drowned. Nearly 3,000 remain in captivity, their fates unknown. Oppressed, enslaved, forgotten - this  is their little known story.
Forgotten on Sinjar: A Story of Survival is an extraordinary documentary by Israel-born, Toronto-based filmmaker Igal Hecht. It takes us inside the aftermath of the genocide and follows the lives of the survivors today.  It is filmed in a refugee camp in Greece, as well as in Germany and Canada, where too few have finally found safety and asylum.  Emma Broyan, a Yazidi woman with expressive, sad eyes, who has given up everything and moved to Greece to help her people, guides us in the film.
Through the lens of talented videographer, Israeli Leor Cohen, we view the hardships of living in the Greek DP camp.  Rows of white tents, sprawled on barren stony earth is home to hundreds of families. Particularly poignant are scenes of children talking about memories of ISIS, the deaths, and their lives today in the camp.  Cohen’s blunt use of closeups of the children are vivid and moving.
In the summer of 2015, a Montreal business man and father of six, Steve Maman, launched a campaign to save girls and women from the hands of the Islamic State militants,  raising several hundreds of thousands of dollars to pay for the release of the captives.  He is shown in the film at the  Lesbos refugee camp in Greece.  Maman, who comes from a Sephardic Jewish family, draws parallels to the Holocaust “except in the Holocaust they would burn bodies of people that were already dead; here, they’re actually burning them to kill them.” He and his organization also helped get many Yazidis to Germany.
In Germany, where 11,000 Yazidis have found refuge, we meet Bayam, a young Yazidi woman who escaped ISIS, tells her story.  “They handcuffed the men and old women and killed them.. The Kurdish forces that were supposed to protect us, vanished.  That night they took us to Mosul.  I was with my mother, but after 15 days, they separated us.  They took me to Raqqa in Syria.  They were raping and selling us between each other.   They did dirty things.  We were serving them, taking care of their kids, cleaning their houses.  They were marrying us and saying  “You are Yazidi infidels …”  She was bought and sold 12 times in her one year and three months time of captivity.  “This will stay with me until I die.  I will not be happy.   My happiness is over,”  she said quietly.
Her eyes lit up when told the crew was Canadian and mostly Jewish.   She says she was saved by Jews from Canada, referring to Steve Maman.
Today, Toronto is the base of Sheik Mirza Ismail, Chairperson Yazidi, Human Rights Organization International. Tall, bearded , soft spoken, he is relentless is his efforts to rescue and help give his people new lives. We see him first at a demonstration for Yazidis in downtown Toronto dressed in his white official garments.   “Canada has brought in more than 50,000 Syrians because of the civil war there and just a couple of hundred Yazidis.  But the Yazidis have faced genocide and are on the edge of total annihilation”, he said in an interview with me.  He implores the government to at least give equal rights to the Yazidi refugees. “They’ve lost everything and for many that includes their loved ones that are still missing, still being bought and sold in sex slave markets
The demonstration, and many others,  was organized by Renanah Gemeiner, cofounder of Canadian Jews and Friends for Yazidis. She likens the Yazidi tragedy to that of the Jews in the Holocaust - persecuted and killed for simply being Yazidis and abandoned by the world. “If all of us would stand up and oppose evil these tragedies would never happen,” she said.
Canada is stunningly deaf and blind to the fate and future of the Yazidis and the other persecuted minorities of norther Iraq - Christians, Shiites, Mandeans, Bahai.  The government has officially declared that the Yazidi people were the target of genocide.  According to international law, when a government has declared a genocide, they have an obligation to ensure their safety.
Thus far, more than 55,000 Syrians have been airlifted to Canada; but only a few hundred Yazidis. While Germany has taken in 11,000 in one year.
Forgotten on Sinjar:  A Story of Survival, will premiere on the Documentary Channel, Jan. 18, at 10 pm.