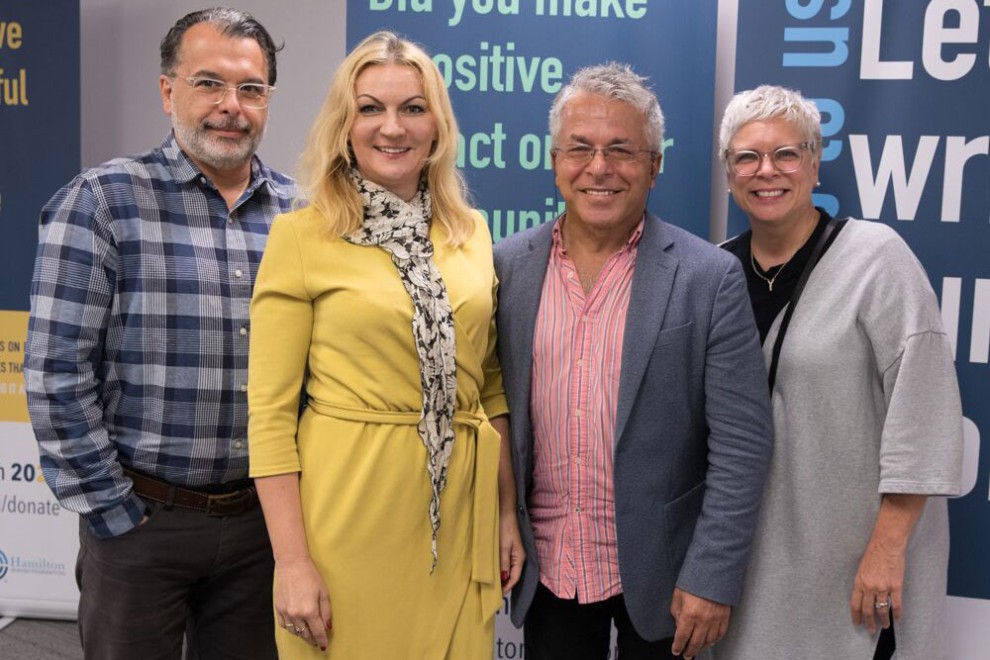 Slawomir Grunberg beamed as he looked out at the audience in a Hamilton Public Library auditorium after a screening of his film “Karski and the Lords of Humanity.” Speaking in Polish-accented English, the Emmy Award-winning documentary filmmaker told attendees that he was deeply gratified to see the local Polish and Jewish communities come together to learn about a Second World War Polish resistance hero who delivered one of the first eyewitness accounts of Nazi atrocities to the allied powers.

Grunberg was in town in early September at the invitation of the Hamilton branch of the Canadian Polish Congress and the Hamilton Jewish Federation, who co-sponsored the screening. As the evening wore on it would become evident that Grunberg feels at home in both communities, which explains why he is uniquely positioned to promote mutual understanding between the two.

Grunberg’s personal biography mirrors those of many among the first post-war generation of Polish Jews. Born in 1951, Grunberg became aware of his Jewish identity during his teenage years, a discovery that caused him great consternation. After moving to the United States in 1981, Grunberg began a journey of self-discovery that would see him increasingly choose Jewish subjects as the focus of his growing body of work.

In his conversation with the HJN the morning after the screening, Grunberg spoke in more detail about his personal  history, the revival of Jewish life in Poland today and why he sees “Karski and the Lords of Humanity” as his most successful film.

When did you discover that you were Jewish?
My mother and father got divorced before I was born and I was brought up by my grandparents on my mother’s side. I never heard the word “Jew” except when I misbehaved, I would be called “Jewish seed” by my grandmother. I had no idea what “Jew” meant, but I knew it was a bad word. Years later, when I started to dig deeper into my Jewish background. I realized that my grandmother’s family was also Jewish but they converted to Catholicism at the turn of the century to avoid pogroms. The way she acted was sort of anti-Semitic but she was Jewish to the point that even though she had all the right papers that identified her as Catholic, she had to hide during the war because her look was so obviously Jewish. When I was in high school I was much more aware of being Jewish because I’d seen a lot of movies on television about the Second World War. There was a Czech movie that played on the main television channel. The name Grunberg showed up (on the list of victims’ names), and  I was scared to death that my colleagues in high school would learn that I was Jewish because being “Grunberg” obviously put me in a different category.  I didn’t want to be a Jew and I didn’t feel that I was a Jew. I wanted to be as Polish as possible.

How typical was your experience in the first post-war generation of Polish Jews?
I would say very typical for families either from mixed marriages or for those wanted to hide their Jewish backgrounds. A lot of them changed their last names or gave Polish or Slovac first names to their children. Some became anti-Semites. People were afraid (that history could repeat itself.)  My father, who was a historian and to whom I dedicated the film, until the end of his life, tried to protect me, and didn’t want me to be too open about my background.

What kind of antisemitic experiences did you encounter during your years in Poland?
In university, there were several incidents — I would even call it a lynch —  by my colleagues who were Polish, who beat me up because I’m a Jew. I learned very quickly that whatever I would say about who I am didn’t matter because I was perceived as a Jew. In 1979 when I won first place in a film festival in Krakow my colleague came to me and said, “I know why you won ...  because the head of the jury is a Jew.” When I left for the United States in 1981, suddenly I was treated completely differently. Nobody treated me differently because I was seen as an immigrant and it didn’t matter if I was a Jew or not.

How do you account for the revival of Jewish culture in Poland?
The revival of Jewish life in Poland, as I see it,  has been happening for the last 10 or 15 years. Parents on their death beds, were  telling their children and grandchildren that they were Jewish. Or people became curious about their last names or absence of extended family and were discovering it for themselves. That’s why there’s such an unusual growing number of Jews in Poland. Jews are discovering that they’re Jews. Krakow is a particularly friendly environment because of the Krakow JCC, which director Jonathan Ornstein has made into a very important and colourful place and because, for the last 29 years, Krakow has been home to the biggest festival of Jewish culture in the world, created and still run by a non-Jew.

Is Polish antisemitism a problem today?
The official Polish government line is that Poland is the most pro-Jewish country in the world, because there is a festival, and there are Judaic studies. But it’s totally wrong. Antisemitism in Poland is on the same level that it was before, but now it’s in the open.

How was “Karski and the Lords of Humanity" received in Poland?”
I believe it has an impact. That’s why I’m doing it. We take it to high schools and have a conversation. That’s the best that we can do.  I make films to educate. I make films to leave an impact. I don’t make films to entertain, so if the film is alive and invited and can change the world even in the smallest way, that’s a success.

Why was it so meaningful to you to see a mixed audience of Poles and Jews in Hamilton?
Because my experience is telling me how far the Polish and Jewish communities are from each other. How afraid they are of each other and how they don’t understand each other.  “Karski and the Lords of Humanity” is the most successful of all the films I’ve made because it deals with a totally Jewish subject in a way that both the Jewish and Polish communities can get together and talk about.

"Karski and the Lords of Humanity" can be ordered through the website logtv.com.