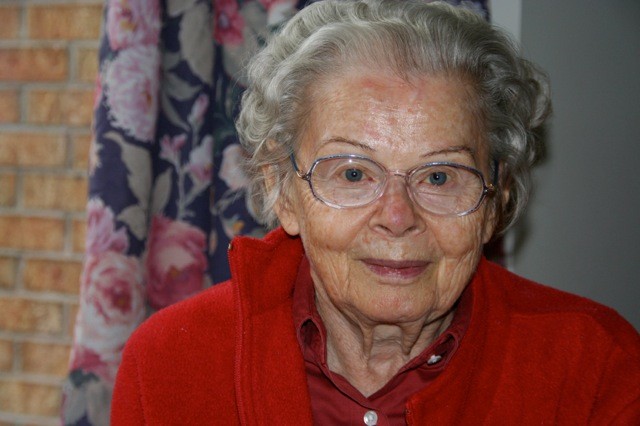 If great art is a reflection of the artist's soul, than the sculptures of Ora Markstein tell the story of a woman whose diminutive physical stature is contrasted by a force of nature so powerful that neither the Holocaust nor a lifetime of struggle could diminish its determination to create beauty in the world. This February, Hamiltonians will have an opportunity to view a sampling of her exquisite marble and alabaster sculptures at the Art Gallery of Hamilton's Atelier: Ora Markstein, an exhibit that runs from February 16 to April 27, 2008.

Markstein's sculptures, according to the Art Gallery of Hamilton's website, evoke "a rare purity that cuts through to the heart of the matter, by finding the life in the stone."  Their creator too, cuts to the heart of the matter, when recalling a life lived unflinchingly  ­facing all of its challenges head on, while holding a steady course towards the freedom to create.

Born and raised in a Hungarian town near Budapest, Markstein was 15 year old when the Holocaust arrived at her door. She and her sister were raised in a tightly knit, sheltered environment, a fact, she acknowledges, that made the hell that was to come especially hard to bear. "I always say, until the Holocaust, I was just dreaming and I woke up in Auschwitz."

Miraculously, Ora, her immediate family, and her fiancé, Francis Markstein, survived the war. Ten days after her return from the camps, she and Francis were married at a ceremony in which they just barely scraped together a minyan among the town's survivors.  With no idea of where they were headed, the couple left Hungary in 1946 ­ despite Ora¹s pregnancy and her father's objections.

She recalls that her father said,, "You barely survived and you take a rucksack on your back and you leave? Where are you going?"  But Markstein "could not bear to stay there" and was desperate to leave.

With the birth of the State of Israel still two years away, the Marksteins, travelling in an illegal transport organized by the Jewish Agency, were taken to a UN sponsored refugee camp in Germany, where Ora gave birth to her son, Igor. While in the camp, the couple befriended a 16-year-old orphan and fellow survivor named John Hirsch and this relationship proved providential in bringing the Marksteins to Hamilton some thirty years later.

After a year in the refugee camp, the Marksteins travelled  to France in search of work. However, the post-war atmosphere  proved inhospitable to Jewish refugees and they reluctantly returned to Hungary, now under communist rule. With the newly- born Jewish state in their sights, they fled again at great personal risk before finally reaching Israel in 1949.  Life in Israel was challenging: poor economic conditions and constant strife with the indigent Arab population made it difficult to eke out a viable living.

The Marksteins uprooted themselves several times before settling in Holon, chosen so that their son, who was demonstrating considerable musical talent, could study with a master teacher. Markstein, too, had found a teacher ­a Hungarian sculptor to whose one-room studio she would go to learn how to model in clay and cast in plaster by the light of a small kerosene lamp. As the years passed, their son continued to thrive and in the early 1970's, he moved to Illinois to further his studies. During a 1975 visit to Montreal, the Marksteins made a spontaneous decision, to help Francis apply as a mature student to Sir George Williams University (now known as Concordia). Following his acceptance, the wheels were set in motion for the family's permanent move to Canada.

The next chapter of her life began when Markstein made the acquaintance of Montreal based sculptor Ethel Rosenfeld. After showing her photographs of plaster models that Markstein had made in Israel, Rosenfeld told her, "But you are thinking in stone. You feel in stone."

Markstein was still riding high on those words when the sculptor called the following week with news that she had arranged for a scholarship at the city's Saide Bronfman Centre. The memory of Markstein's first day of class is as fresh as if it happened yesterday.

There were mostly women working there", doing it as a hobby. [The instructor] gave me a small piece of soapstone that somebody had already ruined. He put me at a table and gave me two tools, which were [also] not very good. And he said, "do something." And I began to work and made something.  Im still crying when I think of it. Because I felt so elevated. I felt so happy. I can''t even describe it. After a short time, the instructor came over and looked at her work. "You don't need me," he said. "Just work."

Meanwhile, their old friend, John Hirsch came to visit them in Montreal. Shortly after their time together in the German refugee camp, Hirsch had been accepted into Canada as a war orphan and was adopted by a Winnipeg family. Now a successful theatre director with the CBC and the Stratford Festival, Hirsch was anxious to help his old friends acclimate to Canadian life. When Hirsch learned that Francis Markstein had found employment in Hamilton as a teacher at Beth Jacob Synagogue's afternoon school, he was delighted. He excitedly informed the Marksteins that his good friends, Larry and Sharon Enkin, would welcome them like family.

The Enkins opened their hearts and home to the Marksteins, introducing them to the community and helping find them a home. Sharon Enkin became a champion of Ora's art and arranged for an exhibit at the Jewish Community Centre on Delaware Avenue, with Hirsch himself coming down to open the show.

Over the next several years, Markstein worked prolifically and both her sculptures and paintings met with widespread acclaim. In 1991, Markstein's life was forever altered by the death of her beloved Francis. Her husband, whom she describes as "a genius", was a renaissance man who wrote poems and produced translations of classic works in English, French, German, Hungarian, Hebrew, Italian, Spanish and many others. For two years, she was unable to produce any artwork. Then, one day, "I realized that if I just go on crying day and night I'm finished. My husband did not want that." Markstein somehow found the strength to carry on and return to her art.  In 2005, her good friend, an art collector, persuaded  Art Gallery of Hamilton's curator, Sara Knelman, to visit Markstein's home studio.

"I sat down with her for an afternoon that I still remember so vividly," said Knelman, describing her first glimpse of Markstein¹s sculptures as "incredibly expressive and moving ­ all crafted from stone, which is extremely rare." Sculpting in stone is no longer common, explained Knelman. "It's technically difficult and not easy to manage," she said, adding how amazed she was that such a tiny woman was able to create in such a physically challenging medium.

Knelman organized the exhibit with a view to showcasing the artist's  "incredible emotional strength" by highlighting themes that Markstein has explored consistently in her art ­ love, loss, and renewal. Markstein herself is very pleased about all the fuss, although it pains her deeply that her husband did not live to share in the moment. That sorrow will be tempered, however, by the presence of her son and daughter-in-law, Florida based musicians, who will perform at the opening reception on February 17. She is clear, however, that there is much within her that still seeks to find expression.