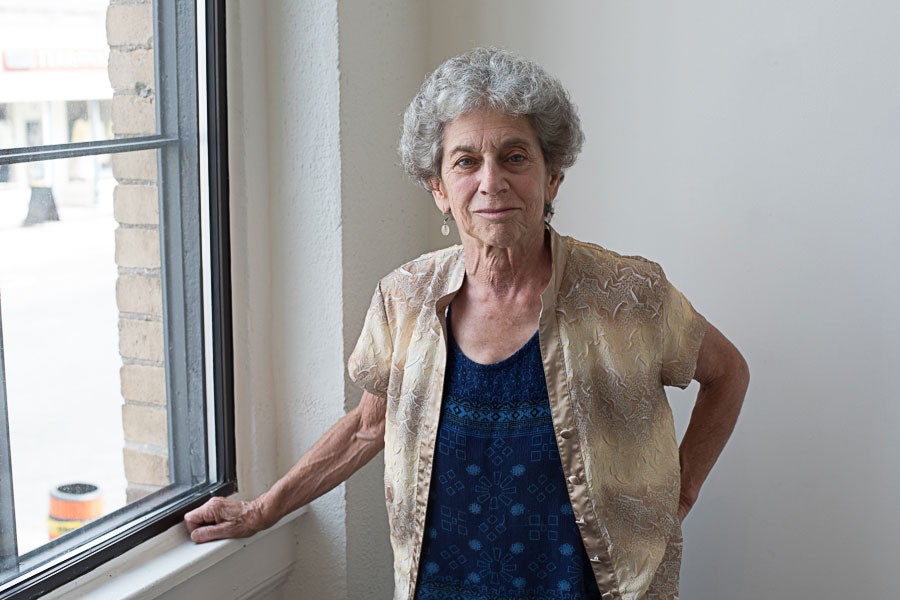 In early August, I had the pleasure of interviewing Ellen Jaffe, a well-regarded member of the Hamilton arts community, just prior to her move to Toronto.

Having a creative imagination — and knowing how to use it — has been a strong theme of Ellen Jaffe's life, beginning in childhood. Another theme has been her commitment to social justice and interest in family, which comes through in much of her writing.

Jaffe has published several works and is known primarily, but not exclusively, for her poetry. She is also the author of the young adult novel, "Feast of Lights", has taught writing to various age groups and has written a book about journaling, called "Writing Your Way". Jaffe co-edited two anthologies with Lil Blume, in 2009 and 2011 and has also been a contributing writer in many publications. She has also worked as a psychotherapist in addition to her writing career.

After growing up in New York City, Jaffe left the United States in 1972 and moved to England, where she studied psychotherapy. Her move to Canada in 1979 was in part due to her opposition to the Vietnam War. She lived in Woodstock, Ontario until 2000, when she moved to Hamilton.

Both of Jaffe's parents loved reading, and there were always books around. “I started writing when I was really young. I always remember writing, ever since I could hold a pencil,” she said. “I remember telling myself stories as a little girl. As an only child, I had a lot of time. I would imagine a town and write about it. I used my imagination a lot.”

Jaffe spoke very highly of Hamilton and how it has influenced her writing career. Living in Woodstock was too limiting for her as a writer and while living there, she began to meet with Hamilton writers.

“I moved to Hamilton as I knew people here. I felt at home here very quickly,” she said. “Toronto felt like it was too far and too big. There was a lot of generosity among writers here, a sense of community and collegiality because it’s smaller.”

When she arrived in Hamilton, Jaffe connected with Rabbi Bernard and Marjorie Baskin, who helped her and with whom she became friends.  She became involved with Temple Anshe Sholom, where she and Lil Blume directed three successful Jewish Literary Festivals in 2002, 2009 and 2012.

Creativity and self-expression are fundamental human needs, says Jaffe, noting the value of keeping a journal, which helps release thoughts and feelings. She revealed how journaling helped her deal with things in her life, such as her mother dying. Jaffe also believes writing can be used to fight injustice and shake up complacency. She writes every day and says she feels better when she does. She never experiences writer’s block, but sometimes procrastinates. Her advice to aspiring writers is to read and write as much as possible, enter writing contests and participate in writers’ groups.

Jaffe feels that being a Jewish writer gives her a unique perspective. Her family was not observant but they celebrated major holidays and she always identified as Jewish. We discussed how the reverence for words is one aspect of being Jewish. Another is the focus on social justice and family, both of which are exemplified in Jaffe's work. Her novel, "Feast of Lights", is entirely Jewish in its’ content and theme.

“I always felt a strong Jewish connection,” she said. “There’s a social conscience that comes with being Jewish. It means you identify with anyone who’s oppressed. I think being Jewish is a way of looking at the world. There is a comfort with words.”

Jaffe will definitely be missed in this community, but she assured me that she will maintain a connection with Hamilton, a city that has clearly been an important part of her life and artistic career.

For more information about Ellen Jaffe and to order her poetry book, "Skinny Dipping" with the Muse, visit ellen-s-jaffe.com.

For those killed and injured at the Tree of Life Synagogue in Pittsburgh, October 27, 2018 (Cheshvan 18, 5779), during a baby-naming ceremony, and for their loved ones. And for all of us.

If  I were naming a child today,
I would call her L’Chaim, life.
I would call her Tikvah, hope.
I would call him Gabriel, God is my strength,
and Raphael for healing and protection.
I would plant the Tree of Life in her heart, in his heart,
to grow and flourish in sweetness and peace, Shalom,
rooting out evil weeds and seeds of hatred, violence,
isolation from humanity  --  and from spirit.
I would ask the breath of life to flow through him, through her
like a quickening wind,
making the evil eye quiver and turn aside in fear.
Let Shekhinah sing songs of joy and bring comfort in sadness
under nurturing wings.
Let this child’s name be holy,
And let this child be whole-hearted, blessed, and wholly loved
for all the days of her and of his life.