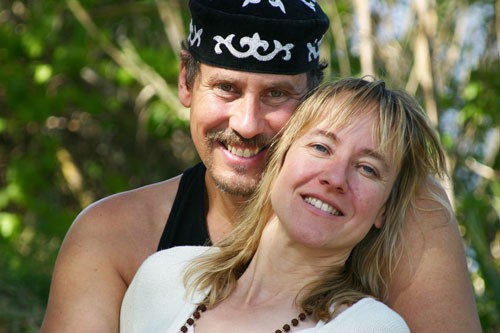 The joke, well circulated among Jewish practitioners of Buddhism, goes something like this: A Jewish woman schleps to the Himalayas in search of a famous guru. After long negotiations with the saffron-clothed monk who screens his master’s visitors, she is finally granted access to the holy man on condition that she utters no more than eight words. As she enters the cave where the holy man sits in silent meditation, she says, “Sheldon, it’s your mother. Enough already, come home!”

The story speaks to the phenomenon of the disproportionate number of Jews among North American followers of Eastern spiritual practices. Among them are the singing/songwriting duo Benjy and Heather Wertheimer. The couple, based in the United States, perform kirtan, a form of devotional Hindu chanting. In a 2012 blog post, Benjy Wertheimer revealed that both his and his wife's father came to the United States as refugees from Nazi Germany. In an exclusive interview with the HJN, the Wertheimers discuss how they reconcile their Jewish backgrounds with their spiritual practice.

Your backgrounds are remarkably similar.
HW: Yes, both of our fathers fled the Nazis as very young boys. My dad at age five and Benjy’s dad at age six. They both ended up becoming psychologists, going to Harvard, marrying non-Jewish women, and having three children — a girl and two younger boys. It’s amazing synergy that their paths paralleled each other.

BW: Our family’s story has it that my grandparents were at a soiree with friends ... listening to the new chancellor’s speech on the radio and as they walked home, my grandfather said, “we have to leave and we have to leave now.” They would make their way from Berlin to Prague and from there to New York and wound up in New Rochelle. Eventually my grandfather ended up teaching at the New School in Manhattan.

Do you see your attraction to Eastern spirituality related to your Jewish backgrounds?
BW: My father and grandfather weren’t practicing Jews, but were culturally extremely Jewish and that came down to us. We both feel a very strong Jewish connection in our lives. My sister actually went through a very rigorous (conversion) process and is now an orthodox Hasidic Jew. Certainly, anecdotally, I’ve noticed that, compared to the general population, there’s a disproportionate number of Jews who have come into the yoga or the Buddhist scene.

HW: I grew up in a small town in Minnesota, and I also feel myself as Jewish, although I didn’t grow up practicing Judaism or being directly involved in Jewish culture. Yet my father, even though he considers himself an agnostic, is extremely Jewish culturally. One thing that was a value in my family was that we were all allowed and encouraged to explore different ideas and different paths of creativity. I think perhaps that those qualities contribute to Jewish people ending up in Eastern traditions. It could also be a resonance with ritual, with tradition, with the timelessness of ancient world traditions, or even a calling. There’s also repetitive singing and chanting that occur in Judaism that could, for some, resonate with kirtan and with mantra. I mean, even think about the word “shalom” containing the word “Om.”

How do you reconcile the chanting the names of Hindu deities in your kirtan practice with your Jewish roots?
BW: I remember having problems when I was studying Indian classical music. I  loved the music and I could feel the spirituality in the music, but I found the multiplicity of gods and goddesses to be very confusing. I was talking to some of my teachers about this and there was this image that one of my teachers shared with me that was very helpful. Imagine, she said, that at the centre of absolutely everything, there’s this indescribably beautiful jewel, but because of our limitations, we’re only able to look at is as between slats of a fence from one angle at a time. When she suggested that I think of each of the Hindu deities representing a different viewpoint, that suddenly kind of had a light go on for me. I’ve noticed that in my sister’s tradition, you have so many different oblique references and names for God that’s also a recognition that this is something absolutely beyond concept and beyond words that we’re talking about.

HW: I’m very clear that there’s one great presence of universal consciousness that exists and is at the heart of all religions, and that the different names and deities of Hinduism are portals into that oneness, and so I can be chanting to a specific deity and to a specific presence, but also at the same time I’m really feeling the  oneness that lies underneath it all.

BW: When we’re talking about comprehending something that is so far beyond our ability to conceive or verbalize, I find that anthropomorphization can be a gift. For me, Sarasawati, the goddess of music, is a something I can pour my absolute love back to that which gave me life, breath and everything around us and so much more. I think that that’s actually quite closely aligned to many of the things I’ve seen in Jewish lore in the kinds of thanksgiving and recognition of the total transcendence of God.

HW: I very much resonate with Krishna Das’s perspective which is that, when I’m chanting, I’m not focusing exactly on the deity that I’m chanting to.What I’m doing is giving myself over and surrendering into the practice of the singing itself, the awareness that arises about everything that’s happening in that moment of chanting the sacred names and mantras. The feeling of continuity begins to arise, the opening of the heart. The same thing happens to me in meditation.

One of your CDs includes a track that’s a Hebrew chant. How did that come about and how does it resonate with your audiences?
HW: We got it from Rabbi Shefa Gold, who actually got it from somebody several hundred years earlier. We fell in love with it. we sing it oftentimes in deep relaxation in yoga and people have great heart openings with it, especially those from a Jewish heritage.

Were your spiritual paths, in anyway a rebellion against your upbringing?
BW: It’s interesting because both of us were raised pretty much as secular humanists, and not only we, but all of our siblings have rebelled by becoming intensely spiritual. Sometimes now, I will make a point of being with my sister on shabbes and  ... my brother, who’s a born again Christian, will join her for Passover seders.

HW: I guess being raised agnostic you rebel by finding some kind of religion or spirituality. All of my brothers are born again Christians.

Do you see a connection between being Jewish and being a spiritual seeker?

BW: Definitely. There’s definitely something to the seeker part. I have long held the position that science is also a religion. It’s just the faith based belief in this thing called objective observation.

HW: The idea about Jews being seekers that resonates with me. I think there’s a kind of questioning, a looking for more.

It must be very interesting when your families get together for holidays.

BW: Thanksgiving seems to work. My (orthodox) brother-in-law finds a degree of approval. “Wow you guys are making a living doing music. That’s very impressive,” he’ll say, but he doesn’t really want to go into the whole spiritual end of things.

Thank you so much for your time and speaking so openly.
BW:  It’s a wonderful inquiry for us too. It’s a beautiful reminder of our roots, where we’re going and what we’re trying to bring about in this incarnation.