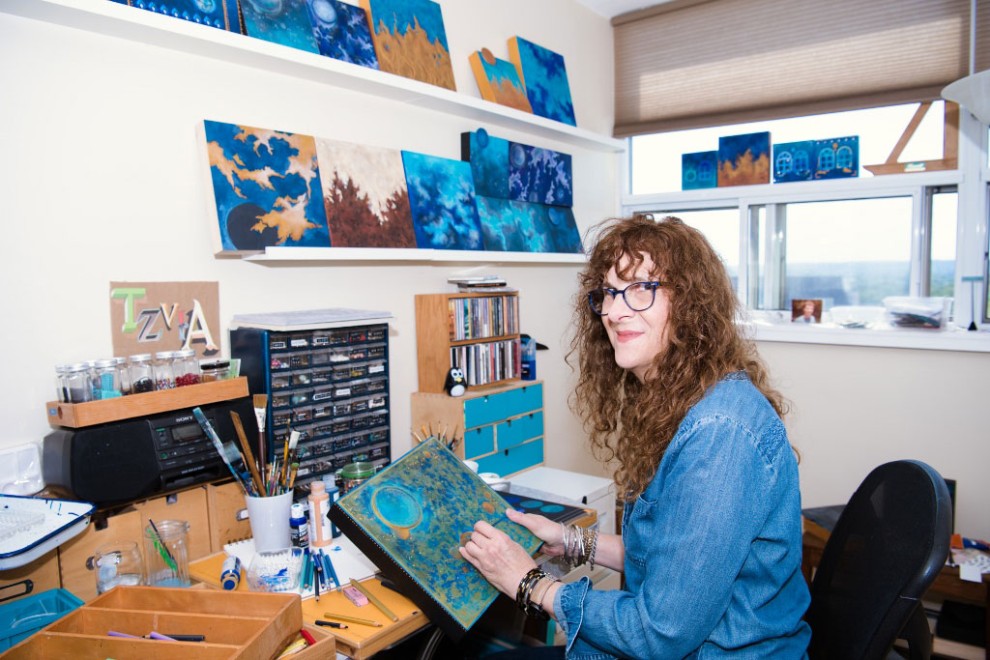 Tzvia Devor doesn’t remember choosing to pursue art. She just always knew it was what she wanted to do.

Growing up in Haifa, Devor was always making art and she remembers that whenever she came across artwork at people’s homes or in public places, she always wanted to look at it and figure it out. In 1979, when she was 18, Devor moved to Oakland to attend the California College of Arts and Crafts (now California College of the Arts) where she “took as many classes as possible.”

After four years, she moved to Canada (which is where she was born), living with her dad and stepmom in Hamilton. She attended Sheridan College to study ceramics.

“I did not want to be a potter. I wanted to study completely non-traditional and almost unheard of techniques, like making your own clay and colourizing it and making pictures out of clay,” said Devor. “People asked what I was doing there. They were not very open to experimentation then.”

After a year at the Dundas Valley School of Art, Devor tried to figure out how she could apply her art education to a career. “Many of the jobs I was interested in, women couldn’t do. I wanted to work on the floor of a printing company, mixing the inks and operating machinery. I could not do that,” she said.

Deciding she should learn a trade, Devor, who could only “fry an egg and make toast,” enrolled in the pastry course at George Brown College. “The program was only two months long and I wanted to get started with my life,” she said. “I ended up being really good at it.”

Devor had apprenticeships in five-star hotels working with European chefs. In 1986, she won the Taste of Canada competition with her puff pastry fruit tarts. She spent a year as head pastry chef for the dairy kitchen at the luxury Laromme hotel in Israel, now the Inbal Jerusalem Hotel.

After moving back to Hamilton, Devor lived in Westdale until five years ago. Now living in downtown Hamilton, Devor runs Tzvia’s Treats, preparing made-to-order desserts and creates art that appears in galleries and private collections.

“I am interested in mixed media art,” she said. “It is like cooking and baking—mixing techniques together and seeing what happens. I am really happy that there are no more rules and no one is telling me what I can do. It is a real joy for me, just to always try new things.”

Devor’s work includes outer space or water themes. She combines mixed media with ancient art, including old symbols from the Middle East. Her favourite colors to work in are blue, purple and turquoise.

“Those colours really resonate with me and blue is also the colour of peace and calm. I am trying to bring the feeling of peacefulness and calm to my art,” Devor said, adding that she is “100 per cent influenced by growing up in Israel.

“I love being here. My son and my friends are here. I have made a life here, but I am in Israel mode in my head.”

On Oct. 5-6, Devor will be a featured artist on the Dundas Studio Tour. The tour includes visual or mixed media artists, potters, goldsmiths, jewelers and photographers. To be selected as part of the tour, artists must submit samples of their work which are juried by the tour committee. This year’s tour includes eight studio locations and 32 artists. Devor will be featuring her boho style earrings, necklaces and small hanging objects of Middle Eastern symbols, including the pomegranate and hamsa, which wards off the evil eye.

“I am a mixed media artist, so Tzvia’s work interested me on a personal level,” said Kristina Kirkwood. “If a work can intrigue you to want to reach out and run your fingers over it, I am a fan. Tzvia’s work is inspired by antiquities, paleolithic art and the endless possibilities of space exploration.”

Devor, who was also part of the tour last year, is happy to be a part of the event. “I felt really at home last year. The other artists are incredible and inspiring,” she said. “It just feels like the right fit.”