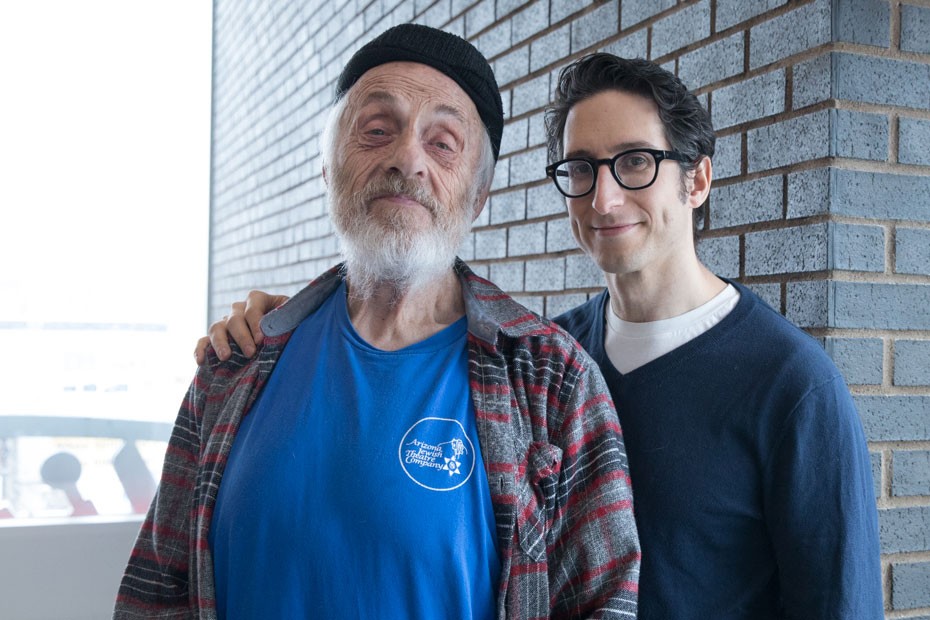 An elderly Jewish gentleman is almost run down by a careless driver, also Jewish, who is subsequently ordered to perform community service by making weekly visits with the man he injured. Their relationship, hostile and wary at first, evolves into something beautiful. That’s the premise behind the upcoming production of Visiting Mr. Green at the Pearl Company the first week in May.

That Hamilton audiences are getting an opportunity to see the highly acclaimed play, penned in 1997 by Jeff Baron, is thanks to local teacher and Montreal native Daniel Schneiderman, 41. Schneiderman has harboured a secret desire to perform the lead role since first seeing the play 15 years ago while working as an usher at Montreal’s Saidye Bronfman Centre.

“The show just blew me away,” he told the HJN. “It’s funny and moving and touching. Every chance that I got to go in to see the show it got me every time.”

In those days, Schneiderman was an aspiring young actor with dreams of making it professionally. Fate intervened the following year when a testicular cancer diagnosis had Schneiderman think seriously about changing course. After creating a one-man show about his cancer experience that he brought to high schools, cancer organizations and retreats, he decided it was time to adopt a more stable lifestyle.

“After the cancer experience I didn’t feel as passionate about auditioning for a Burger King commercial, (asking myself) how is this really making a difference or making an impact? I was ready to move on and change careers.”

Schneiderman had been in Hamilton for seven years teaching French immersion, when “Mr. Green” surfaced once again in his consciousness. Two years ago, he reached out to Dan Penrose, who was then president of the Players Guild. Penrose expressed interest, but when nothing came of it, Schneiderman assumed that was the end of it. But something made Schneiderman reach out to Penrose again last September. At their scheduled meeting, Penrose brought along local producer Enid Aaron. By the end of the meeting, Schneiderman had found his producers. Within a few short weeks, they had a director in Sandi Katz Loewith and the Pearl Company booked as a venue. Now they only had to find their Mr. Green. Enter Harold Jerome, who could have come out of central casting. Like the Mr. Green character, Jerome, 79, is Brooklyn-born, speaks a little Yiddish, can pass for 86 years old, and lives in Hamilton.

Howard Jerome Gomberg is a professional actor who was among thousands of Americans who moved to Canada during the Vietnam War. A self-described “hard-core socialist,” former Greenwich Village folk singer, Greenpeace activist and atheist, Jerome (who prefers to go by his stage name) is a spiritual seeker who’s practiced Buddhism, Hinduism and Kabbalah Judaism. You’ve no doubt seen him or heard his voice in any number of character roles in movies such as Barney’s Version, The Outside Chance of Maximillian Glick or the animated series Dog City. Jerome is also an accomplished theatrical actor, who played the iconic role of the  grandfather in the musical The Apprenticeship of Duddy Kravitz that premiered in Montreal in 2015.

Jerome said he’s very excited to be playing Mr. Green. “I saw Theodore Bikel in a production and fell in love with the show, and even more importantly, the part,” he told the HJN.  “We are both 80-year-old Brooklyn Jews with tsuris and heartbreak in the family. This is a wonderful challenge for a senior actor.”

Visiting Mr. Green may be a small production, but it's also a symbol of the resurgence of energy and creativity taking place in Hamilton, driven by our city's newest arrivals.

"Daniel is the reason this show is happening," said Jerome of his co-star. "Nothing ever happens without passion and it is his passion that is driving this production. One of the beautiful aspects of this play is that, not only is it filled with laughter, but both characters get to reveal something deep about themselves, learn and grow."