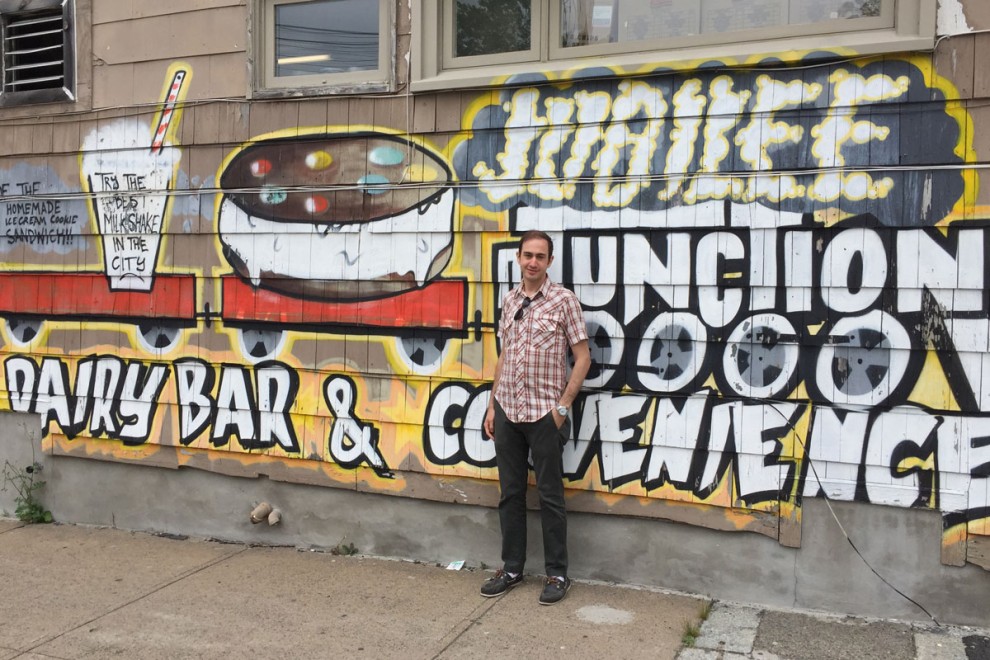 When I tell people here in the U.S. that I’m Canadian, I occasionally get a surprised reaction: “Oh, you don’t sound Canadian!”

Perhaps that’s because I’m from Southern Ontario, which is less a distinct region and more the Canadian spear-tip of the global monoculture. (This applies mostly to the Greater Toronto Area; Hamilton is, as always, a beacon of light in the darkness.) We speak like the TV-people speak—North American default—with the occasional “eh” thrown in.

When I landed at Halifax airport, and was told that I could catch the bus downtown “oot there,” I felt among familial but foreign people—like a modern Jew among black-hatted Haredi.

At my hostel, I entered into a conversation between a local and a travelling Englishman. When I told the Englishman that I was from “near Toronto” (a sad phrase, but a verbal necessity for Hamiltonians on the move), he asked if people there are as nice as people in Atlantic Canada. I responded that Canadians get less nice the farther west you go.

The local interjected: “People get nicer again once you leave Central Canada.”

To which I replied, “We’re still nicer than Americans.”

And thus I conclude, we Central Canadians may be the least Canadian Canadians, but we’re still a titch un-American, thank you very much.

Halifax features a lovely boardwalk bookended by two museums, one on immigration and one on marine history. I told the lady selling tickets at the marine museum — which includes an exhibit on the Halifax Explosion —that I live in Boston and had seen the Christmas tree her city sends us every year. She knew the story, and said that it brought a tear to her eye—and it literally did. You don’t get that kind of reaction from Central Canadian museum types.

The Halifax Explosion was a 1917 disaster in which two ships, one laden with explosives bound for the Kaiser, collided, triggering the largest man-made explosion before Hiroshima. Around 2,000 died and thousands more were injured and left homeless. The state of Massachusetts quickly sent trains filled with medical personnel and supplies to help, and Halifax sends a Christmas tree to Boston each year in gratitude.

In today’s political climate especially, it’s nice to remember that common decency between countries is a thing.

Other worthwhile sites include the aptly named Halifax Citadel, a Halifax-based citadel that once protected this highly ranked port from the British Empire’s various foes–including those Americans who later came to its aid. Teenagers wearing delightful military-grade kilts conduct educational-cum-entertaining tours, and a military museum is also located on the grounds.

At the military museum, the contributions of Canada in general and Nova Scotia in particular to martial greatness are explored. Among the lesser-known facts I learned was that David Ben-Gurion received training by the British in Nova Scotia as part of the Jewish Legion, which went on to fight the Ottomans. Nova Judea was not to be, however, as Ben-Gurion stayed in the Middle East to become Israel’s first prime minister.

Also in Halifax, I was introduced by a former local to Jubilee Junction Dairy Bar & Convenience, “Home of the original homemade ice cream cookie sandwich!!” The concept is inarguable: you select a cookie and an ice cream flavour. They then place a heap of ice cream on top of the first cookie, ask you what kind of mini chocolate bar you want, and add that to the mix. They then place another cookie on top (it could be a totally different kind of cookie from the one at the bottom), and you eat it. The results speak for themselves.

I didn’t plan to spend long in Sydney—Cape Breton Island’s de facto capital—but a delay in renting a car to drive the Cabot Trail meant I was there for the good part of a day, so I decided to make the most of it.

The city’s touristic pièce de résistance is a giant fiddle located near a commercial pavilion catering to cruise-ship passengers. But one can only spend so long listening to prerecorded fiddle music emanating from a giant fiddle before thoughts of self-immolation spring to mind, so I decided to do some exploring.

I stumbled upon the Jost House Museum, which is an old house once owned by someone named Jost. The main attraction, however, is the omniscient (if “omni” means “Sydney”) tour guide, who taught me everything there is to know about the city as I waited for the first available car out of there.

Among the whirlwind of facts I learned: before Hamilton rudely stole its thunder, Sydney was Canada’s steel town, and many Sydney folk once ventured to Hamilton in search of the jobs that Hamilton itself later lost. Now Sydney, and Cape Breton in general, is on an economic downturn, eager for investment and immigrants. A Cape Bretonian even started a campaign to get Americans disappointed by Trump's election to move there. One, by my tour guide’s count, did, but it may have been for other reasons.

Sydney, I came away feeling, is like an Atlantic Hamilton: hardscrabble but abounding in civic pride and inimitable character, which assures it a noble destiny even as more prosperous but gritless Babylons fall.

My feeling of connection to Hamilton deepened when I called a cab after dropping off my rental truck. (No cars were available—I did drive the Cabot Trail, which is indeed extremely scenic, but I don’t see the point in describing nature, so we’ll skip over that.)

The cab driver, sleeveless and listening to Pink Floyd, advised me that the door to his van didn’t always open. Once inside, I was assured of a pleasant journey by his non-functioning meter and decision to damn the occasional beep and not wear a seatbelt. Along the way, he pointed out a family of eagles that live near the dump—a couple and a male adolescent. (Incidentally, Cape Breton contributed to the repopulation of the U.S. eagle population, my earlier tour guide told me.)

But my Atlantic Hamiltonian got me to the airport safe and sound and charged a fair, if entirely arbitrary, $15.

Scenic drives and picturesque lighthouses are great and all, but to me, that’s what travel is really about: getting off the beaten trail to eat a homemade ice cream sandwich, and to learn from a cab driver about a family of eagles that live at the dump.