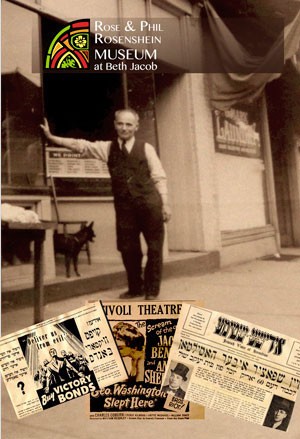 On the front page of each issue of The Jewish Voice of Hamilton, his Yiddish-language newspaper, publisher Henry Balinson wrote a column in his inimitable style where he thought over “our kingdom of Hamilton,” and wondered “how Jews live, and how Jews don’t live.”

Reading the columns today allows one to stroll through 1930s and 1940s Hamilton, kibitzing with a charismatic and opinionated observer of the city, seeing local businesses and community leaders, talking about shul politics and universal issues about family and society, about the rise of the Nazis and the war in Europe, and about the heartbreaking death of Balinson’s beloved son, Alex.

Not many people remember that Hamilton once had a thriving Yiddish-language newspaper, but a new exhibit, The Jewish Voice of Hamilton, at the Rose and Phil Rosenshein Museum at Beth Jacob Synagogue spotlights this remarkable publication and explores the dynamic life of the city through the lens of its colourful and provocative publisher, Henry Balinson. The exhibit features many items on public display for the first time: many editions of the newspaper, photographs and other valuable historical and genealogical documents, evocative family memorabilia, local letterpress printing artifacts, and video recordings of oral history, all part of the Balinson Family Archive, a recent acquisition to the Rosenshein Museum. Advertisements in both English and Yiddish for local businesses (some still active today), local politicians and appeals to aid the Red Cross’s war effort offer a further window into an older Hamilton. The designs, images, typefaces, logos and slogans are like walking right into this bygone time in city life.

The Jewish Voice of Hamilton offers the public an opportunity to gain an understanding of the Jewish community during a time of significant social, cultural and economic developments as well as the compelling story of Henry Balinson and his son Alex, an airman who was killed in the Second World War while serving in Malta. In 1911, the ambitious and well-educated Balinson, a writer, poet, and playwright who spoke seven languages, moved from Odessa to Hamilton and immediately began working as a printer and became active in the labour movement. He soon founded International Press which printed the newspaper and myriad other items for the Jewish community as well as for the Polish, Hungarian, Ukrainian, Latvian and other communities. In Balinson’s final “My Stroll Around Hamilton” column, he writes that his “heart pains (him) to have to write (his) own child’s eulogy over a fresh kaver (grave).” After this, he stopped publishing the newspaper. Following his retirement from International Press in the 1950s, his son Morley took over the business. The exhibit concludes with a colourful display of posters advertising local boxing and baseball events from this time.

The family-friendly official opening on Sunday, Sept.20 will feature a tour of the exhibit, video presentations,  guest speakers and children’s activities. For more information, please visit http://www.bethjacobsynagogue.ca/ or contact Wendy Schneider at wendyschnei@gmail.com.