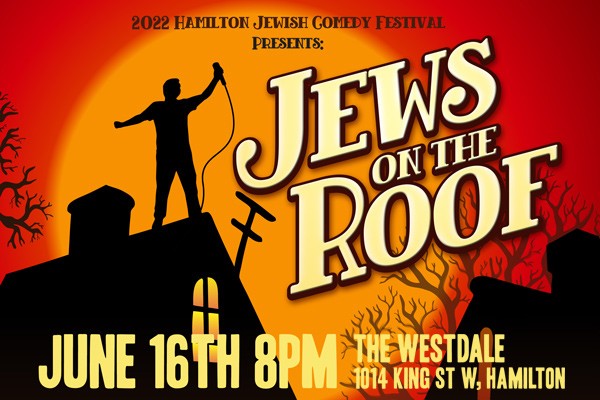 Jews on the Roof, a Jewish comedy festival, is coming to The Westdale theatre on June 15. Below, producer Ronen Geisler talks about why making Jews laugh is an integral part of bringing Jewish culture and community together.

Why did you decide to create the festival?
When I started comedy eight years ago while doing mics and improving as a comic, I realized there was never any platform for Jewish Comedians to showcase themselves. No shows were showing Jewish Comics anywhere in Canada, so I decided to create one. Since then, we have produced multiple shows in Toronto, from small intimate club shows to huge gala events in theatres. We have featured comedians from all over Canada and even some from the United States. Its an event that the community looks forward to each time we put them on.

What is Jews on the Roof?
Jews on the Roof is our gala event. It is the biggest theatre show we produce to showcase the very best Jewish Comedians we can find. Being able to create a growing platform for Jewish comedians is a great way to help and encourage them to develop their acts and train their comedic chops. Each year we get hundreds of requests from Jewish comedians asking to perform at this gala event. We do our best to pick our favourites from the bunch and allow them to perform in front of hundreds of Jews. The comedy scene in Canada has very low ceilings. There isn't as big a career path as a US performer may have. The festival's goal is to help raise that ceiling for comedians and have the focus put on bringing them to the top of the roof.

Who are some of your favourite comedians on your show?
They are all my favourite. I chose the acts myself and tried to create a great mix style for everyone attending the show.

Ben Bankas is hosting the show and has recently gone viral numerous times during the pandemic with his hilarious viral Instagram videos. He may be young, but he has the writing and delivery of a seasoned veteran living in a Boca Vista retirement home.

Natalie Norman is also a great comedian who female Jews can relate to. She talks a lot about single dating life and why finding a nice Jewish guy is so difficult. Every Sunday, you can catch her at Comedy Bar where she hosts her own show, the Crimson Wave.

Ian Sirota another featured act on the show, has opened for: Jerry Seinfeld, Jim Gaffigan, Dennis Miller, Robin Williams and Dana Carvey and headlines comedy clubs across North America. Ian was a regular cast member and writer for Comedy Inc., and Comedy Now.

Simon Rakoff has been a comedian since 1978. His act is well crafted and thought provoking delivered with the smoothness of a veteran and the enthusiasm of a newcomer. He has made audiences laugh across Canada from Newfoundland to Vancouver Island. A top headliner, Simon’s quick mind and engaging personality also make him a popular MC at clubs, corporate and charity events. A favourite at comedy festivals, Simon has performed at Montreal’s Just For Laughs, Halifax Ha!, The Winnipeg Comedy Festival and many others.

Where can people find out more about the event, and where is it happening?
Jews on the Roof is taking place for the first time in Hamilton at The Westdale on Thursday, June 16th. Make sure to get your tickets before it sells out. Tickets are available at jewishcomedyfestival.com