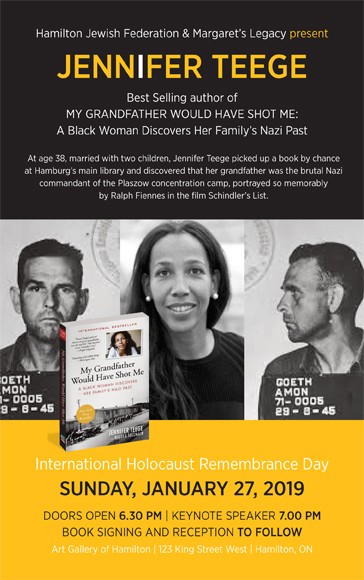 Jennifer Teege still remembers the day her life was changed by a tiny photograph on the cover of a book.

The volume, one she randomly picked up in the main library in Hamburg, was a memoir by the daughter of Amon Goeth, commandant of a German concentration camp in Poland during the Holocaust.

After a moment Teege realized the tiny picture that had captured her attention was of the mother who had given her up for adoption after a brief affair with a Nigerian student.

Until that moment Teege had been utterly unaware of her link to one of history’s truly evil men.

“There was a tiny little picture of my mother on the cover but I did not recognize her immediately,” Teege said in an interview ahead of her appearance in Hamilton Jan. 27. “If I hadn’t been in the library that day or the book was not on the shelf I probably would not know. My biological mother never told me anything and I haven’t had contact with her for the last several years since my childhood. Really I just found out by finding the book.”

Discovering she is a direct descendant of a man responsible for thousands of murders during the Shoah sent Teege into a major depression, followed by a search for the truth of her lineage. That search resulted in her book entitled My Grandfather Would Have Shot Me: A Black Woman Discovers Her Family's Nazi Past and a new career as a Holocaust educator.

“In the beginning it was something I kept secret because I was so overwhelmed by it. I needed some time to come to terms with what I found out,” she said. “I needed some help and had some psychological therapy.

“At first I thought it was like I had lived a double life, like I had been living a lie,” she added. “It has a lot to do with your identity and who you think you are because suddenly everything collapses.”

The story Teege eventually uncovered is a twisted one. Her grandmother Ruth Kalder worked as a secretary at Oskar Schindler’s enamelware plant near the Plaszow concentration camp in Poland.

She met Goeth at a dinner and the two soon began an affair that resulted in the birth of Teege’s mother Monika. Teege was the result of an affair between Monika and black Nigerian man. Teege grew up in orphanages and foster homes before being adopted at age seven. She remembers sporadic contact with her birth mother and grandmother, but she was never told anything of their past.

(Goeth was not one of the widely-known Nazi war criminals. He only gained a public profile after actor Ralph Fiennes brought him to life in Steven Spielberg’s 1993 classic Schindler’s List. Teege remembers seeing movie in Israel where she lived for five years before discovering her own connection to the story. Even without that knowledge she recalls it as a powerful indictment of inhumanity.)

Teege said she worked through the terrible discovery of her lineage by facing the issue and refusing to run away from it.

“You can’t run away from things, it’s better to face them,” she said. “In my case I sought help. What was really important was therapy to deal with all these conflicting feelings, feeling I was scared that maybe I am a bit like my grandfather.

“Those feelings, irrational feelings, were haunting me. It also has a lot to do with identity, to find out who am I, to integrate it into my life and find out how to tell my children. I had to deal with it myself and we’re not talking about days, we’re talking about months and years.”

Partly as a result of that therapy Teege decided she had to speak out about her background and the Nazi era to show people another side of the Holocaust story, and to draw comparisons to what is happening in the world today.

“I am different, the colour of the skin is different. I so don’t represent the Aryan ideal and I hope that when people see me they see a message for humanity, of what is important for ethnic or moral values, especially nowadays,” she said. “I will probably also talk about the situation around the world, about the rise of populist leaders. I think we are living in very dangerous times, not only in the United States where it’s very clear what direction they are heading, but also in Europe and other parts of the world.

“I see that there are threats and I think it is important to speak out loud and warn people and teach them what I have to teach from my point of view,” she added. “Most important for me is the importance of empathy, all these things that were missing in historic times in Germany.”

Teege’s presentation is January 27, Sunday evening, at the Art Gallery of Hamilton. Doors open at 6:30 with the speaker slated for 7 pm. The event is co-sponsored by the Jewish Federation of Hamilton and the Margaret's Legacy Holocaust Education Fund. All proceeds will support the 2020 March of the Living and the Asper Foundation Holocaust and Human Rights Study Program.

Tickets, $25 for adults and $15 for students and seniors, can be reserved by contacting Jonathan at jriaboy@jewishhamilton.org or at 905-648-0605.