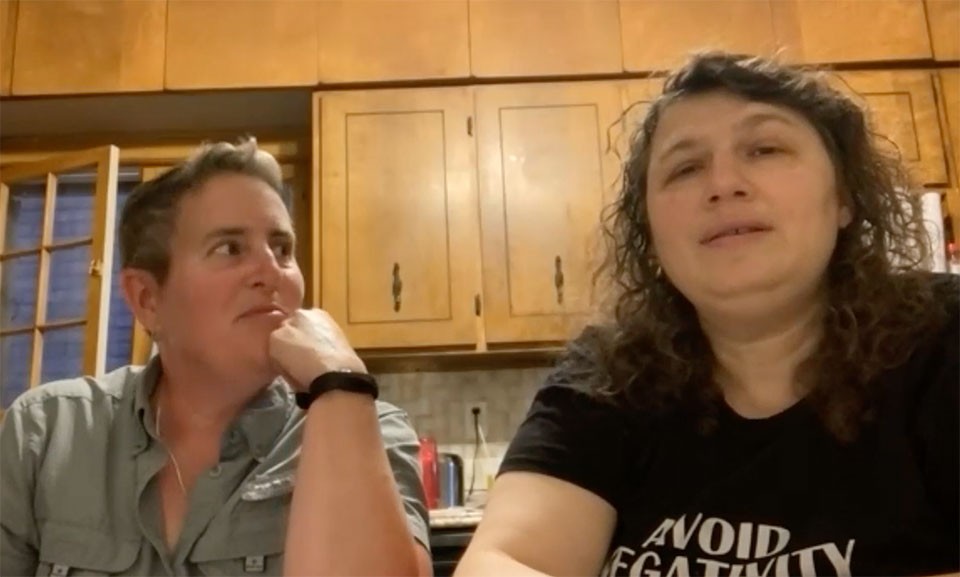 Anna and Denise Lilliman wanted to live openly as both queer and Jewish.

For the synagogue they applied to join, however, that was an uncomfortable combination in the late 1990s. Temple Anshe Sholom’s board ruled lesbians were welcome as individual members, but not as a family.

Getting the country’s oldest Reform congregation to accept them at all was only the first of the changes they nudged the congregation into making. Some of those changes were wrenching – like the debate about performing a same-sex marriage in the main sanctuary.

In that case, the rabbi was willing, but again the Temple’s board resisted.

“I’m convinced they had a committee on how to handle Anna and Denise,” Anna said. “The Temple was still the only shul that would put up with us at all. We met some challenges there, but also a lot of wonderful people.”

The Lillimans were among a group of queer Hamilton Jews who shared their stories of seeking acceptance as part of the closing event of the first Jewish-LGBTQ+ Festival.

Their experiences capture many of the ways in which the world has changed for LGBTQ+ Jews, while also highlighting the distance still to be covered.

Ancaster residents Mark and Sheila Levitt, for example, are at one end of the range. When their youngest son Barry finally told his parents he is gay, the news caused hardly a ripple in their lives.

“I know he was worrying about the family would react, but for us it was just `What’s next?’” Sheila Levitt said.

Her husband had a similar view: “He was just our son and that has never changed,” he said. “We never felt anything other than he’s our son.”

For many in the Liberal Jewish traditions, the Reform and Conservative movements, that’s a standard view today. LGBTQ+ Jews can be ordained as clergy; they can be married in full religious ceremonies and know their families will be accepted. Change has been much slower in the Orthodox community.

The struggle for acceptance, today has moved into new arenas. That’s where the Lilliman’s oldest child Natasha exists, identifying as non-binary, meaning not fitting into either prescribed gender role.

Finding acceptance, or even recognition, of an identity as neither man or woman, is something Lilliman still struggles with.

“My experience as a non-binary Jew has been one of lack of recognition,” Lilliman said. “People just don’t know we exist. The biggest problem is people not recognizing my being or my identity.”

Judaism has never forced people into one or the other gender. In fact, the ancient rabbis who brought the ancient teaching of the faith together in a series of volumes called the Talmud, recognized at least six different genders.

Learning that, and seeing it being understood by the rest of the community, Lilliman said, was “hugely reaffirming and validating for me. I no longer felt like I was trying to introduce something new to the community. I was really trying to reclaim something we had lost over years of trying to assimilate.”

Zahava Barwin’s story is another twist on the issue. She wants to be accepted as a “woman of transgender experience.” It is something she sometimes finds difficult in a religion with some strictly defined gender roles and rigid separations between men and women.

One experience of that was during a visit to the Western Wall, a piece of Solomon’s Temple revered by Jews as holy ground. The Wall is operated as a strictly Orthodox synagogue with a physical barrier between a large section for men and a much smaller space for women.

“As a man I had all these privileges when I went there, but as a woman I had to stay in this small space,” she said.

Steve Arnold is a retired Spectator reporter. He can be reached at stevearnold331@gmail.com.