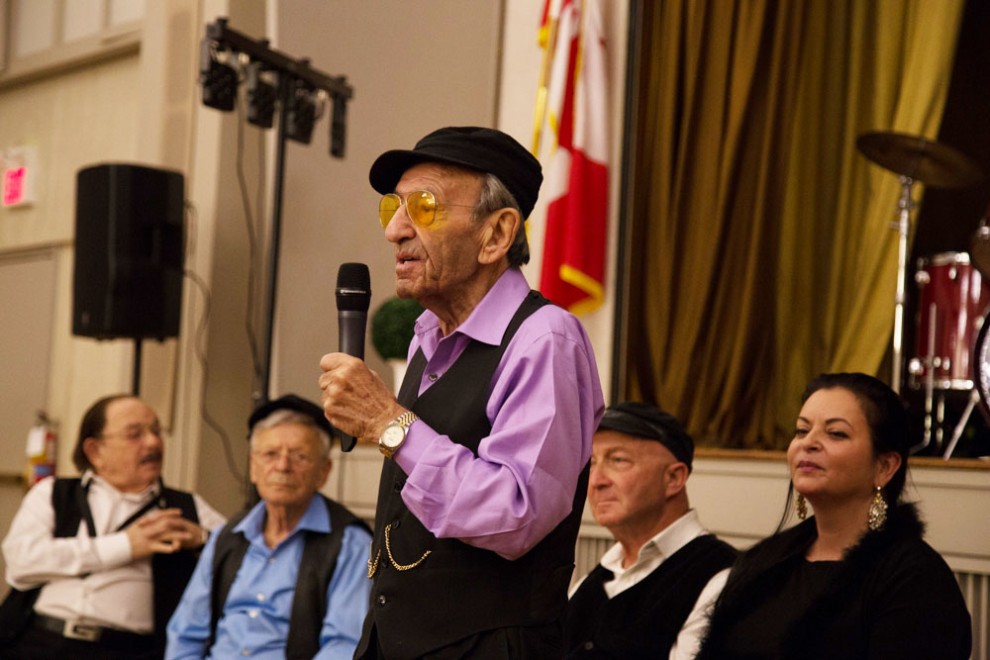 One of the most effective ways to teach the Holocaust is through art and literature, because of the way those disciplines are likely to evoke empathy in students, stimulate emotional understanding and encourage a connection between the individual experience and the collective Jewish experience during the Second World War. That was the main point driven home by a panel of experts in Holocaust education at the opening program of the Hamilton Jewish Federation’s Holocaust Education Week held at Temple Anshe Sholom on Nov. 1, to a crowd of almost 200.

Panel members included Kathy Kacer, author of fiction and non-fiction for children about the the Holocaust, Jody Spiegel, director of the Holocaust Survivors Memoirs Program at the Azrieli Foundation, Grace Centritto, who heads religious studies at Cardinal Newman Catholic high school and Rob Flossman, assistant head of history at Waterdown District High School. Both Centritto and Flossman are recipients of Federation’s Sharon Enkin Award for Excellence in Holocaust Education.

Kacer’s children’s books are based on the experiences of real people who lived through the Holocaust. It’s her way of ensuring that, even after their deaths, their stories will reach an audience.

Similarly Jody Spiegel’s team at the Azrieli Foundation publishes first-hand accounts in an easily readable format that they send, free of charge, to libraries and educational institutions across Canada.

Both teachers agreed that the key to teaching the Holocaust is having students engage in meaningful ways with the material. Two years ago, Flossman’s Grade 11 genocide class created a community museum that has hosted exhibits relating to the Holocaust, the Ukrainian Holodomor and other atrocities. Every year his students serve as docents to younger students and community groups.

Centritto developed a curriculum that has her students learning about the Holocaust through the paintings of Samuel Bak and the photographs of Henryk Ross, both of whom are Polish Jewish survivors. Her students find themes that speak to them, and then use that style to create their own artwork, engaging in a process that helps them “empathize with a human story and make it their own,” she said.

The theme of making history accessible was picked up by community member Lillian Zack during question period, who said that her experience of learning about the First World War as a young girl felt no more significant than learning about the Greeks and Romans.

“I’m wondering how much good intellectual knowledge gives us,” she said, pointing to The Diary of Anne Frank as a better way of teaching history. “When one sees a child one’s own age it makes a difference,” she said, “and when one experiences things through either dramatic form or other experiential attempts, (it encourages students) to feel rather than just think. We don’t act on our thinking. We act on our feelings.”

Sandi Katz Loewith, a member of the Holocaust Education Committee, said she was deeply affected by Zack’s comments. The former drama teacher agrees that   “change happens through experience,” and that the best way to get children, and for that matter, anyone to connect with a subject is through drama and the arts.

The second event took place later that week before a standing room only crowd at Beth Jacob Synagogue, on November 5, and featured Michael Mason, a former Hamiltonian and Holocaust survivor. He was joined by Elin Beaumont, the Senior Educational Outreach and Events Coordinator for the Azrieli Foundation Survivor memoirs Program. The Memoirs program was established to collect and share memoirs written by Holocaust survivors who came to Canada after the war. In interview format, we bore witness to Michael’s testimony. Michael’s story was one of courage, strength, luck, and wit. Indeed, it began with the bad luck of being in the wrong place at the wrong time, and being separated from his family. He told of several instances where he was saved by chance, the first being when he was told upon arrival at Auschwitz to lie about his age and say he was a farmer. As a result, in the infamous selection process at Auschwitz, he went to the right. From Auschwitz, he snuck onto a transport headed for Muhldorf, Germany. While at Muhldorf, he was spared the hard physical labour involved in hauling cement, that brought almost certain death after three or four weeks; Michael worked less than one day and was saved by Herr Jacques, a supervisor of a work detail whom he had befriended. When asked why he thinks he survived, Michael’s response was: “I try to put together all the situations when my life was in imminent danger, and I come to the conclusion that it was partly luck, as well as the ability to adapt to changing situations.” Mason immigrated to Canada, moved to Toronto, and eventually changed his name to Mason. You’ll have to read his memoirs to find out why and how he chose the name.

Mason’s memoir focuses as much on the aftermath of the Holocaust and rebuilding his life in Canada as on his experiences during the war. At a time when many survivors have reached a point in their lives when it is too difficult to continue to speak out, Mason exemplifies extraordinary fortitude and personal courage by continuing to share his story. He signs his book, “Never Again.”

More than 400 people came out to the Canadian premiere of the  Holocaust Survivor Klezmer Band at the Adas Israel on Nov. 9.

The band’s origins go back just over a year ago when Saul Dreier, 90, heard about the death at the age of 110 of Alice Herz-Sommer, who had survived Theresienstadt by playing the piano on orders of the Nazis to fool the Red Cross. Dreier, who had himself survived several concentration camps by playing in informal choirs, approached fellow musician Ruby Sosnowicz, 87, about starting a Klezmer band.

The concert and asked was truly a celebration of life. The band’s repertoire of classic Yiddish songs and other popular tunes had the audience tapping their feet and swaying to the music, their rendition of Ba’Shana Ha’Ba’ah bringing the house down. The positive energy and joy in the room were palpable.

During what was arguably the evening’s most poignant moment, Sosnowicz’s daughter, Chanarose Sosnowicz, asked the Holocaust survivors among the audience to rise and be acknowledged,at which point a handful of individuals, their faces shining with pride, rose from their seats to resounding applause.

“Our Holocaust Education Week deliberately ended on a high note with a program about triumph over tragedy and rebirth,” said Federation CEO, Barb Babij, while praising Dreier and Sosnowicz for their “mission to bring peace to the world through music.”

The group hopes to perform in Poland and in Israel some time next year.