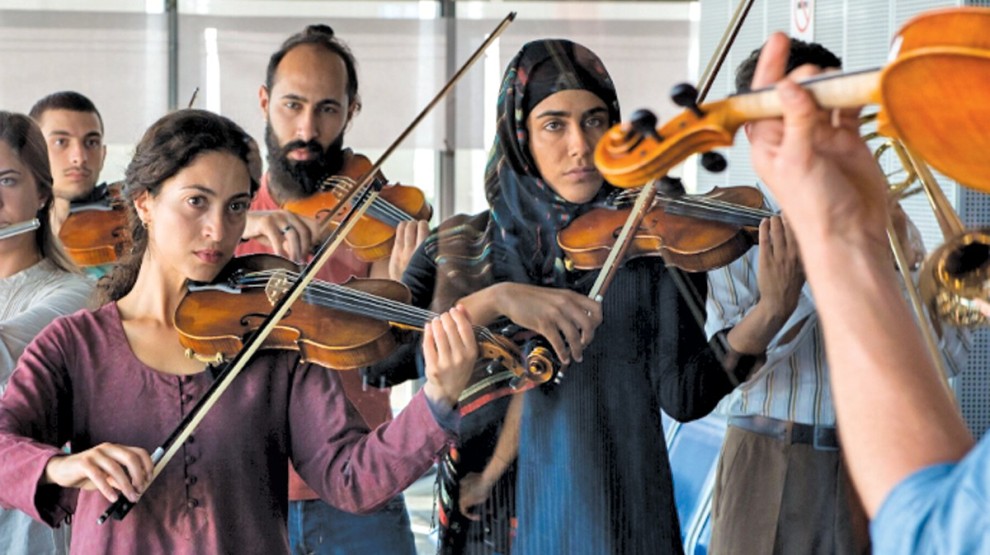 The Windsor Jewish Festival, ongoing for more than 17  years, regularly attracts members of both the Windsor and Detroit Jewish communities.

Rymberg is equally delighted by the prospect of a joint Jewish Film Festival.  “With the combined online power of both the Windsor and Hamilton Jewish communities, we are bringing films with Jewish themes to a broader audience on both sides of the Canada-US border,” he said.

The Festival, which takes place from May 2 to 13, features the following acclaimed films:

The Keeper
United Kingdom, 2019; 113 minutes
A British-German biographical film about Bert Trautmann,  a German professional footballer who played as a goalkeeper for Manchester City from 1949 to 1964. His signing outrages thousands of fans. But Trautmann wins support from an unexpected direction: Rabbi Altmann, a Man City supporter who fled the Nazis, who publishes an open letter opposing the campaign against him. Audience Favorite Award - Baltimore Jewish Film Festival 2020.
View the trailer

The Mover
Latvia 2019 — Latvian with English subtitles,  87 minutes
Latvia’s official Academy Award entry for Best International Feature Film recounts the gripping true story of blue-collar worker Žanis Lipke’s epic rescue operation of Jews during the Second World War, for which he was later called “Latvia’s Schindler,” and was honored as one of the ‘Righteous Among the Nations’ for his heroic deeds.  At the risk of endangering their own family, the Lipkes transported Jews from the Riga ghetto to an underground bunker hidden on their property. Winner - Best Foreign Film, 35th Haifa International Film Festival.
View the trailer

Crescendo
Germany, 2020 –English and German; 106 minutes
When a world-famous conductor tries to create an Israeli-Palestinian orchestra, it takes all his skill and resources to overcome the discord and get them to play in harmony, rising to a tense and emotional finale. Loosely inspired by Daniel Barenboim’s West-Eastern Divan Orchestra. Winner, Audience Award, San Diego Jewish Film Festival 2020.
View the trailer

The Crossing
Norway 2020 – Norwegian with English subtitles; 96 minutes
The story of 10-year-old Gerda and her brother Otto, whose parents are in the Norwegian resistance movement during the Second World War.  The Crossing demonstrates that children, like adults, have the power to shape their world and make it better. Recommended for ages 11 and up. Winner of Best Children’s Film, Amanda Awards Norway.
View the trailer

My Name is Sara
Poland-USA 2019 - English and Polish with English subtitles; 111 minutes
The true life story of Sara Goralnik, a 13-year-old Polish Jew whose entire family was killed by Nazis in September 1942. After a grueling escape to the Ukrainian countryside, Sara steals her Christian best friend’s identity and finds refuge in a small village, where she is taken in by a farmer and his young wife. She soon discovers the dark secrets of her employers’ marriage, compounding her own greatest secret that she must strive to protect, her true identity.
View the trailer

Fiddler — A Miracle of Miracles
USA  2019 – English; 1 hr 36 minutes
This documentary, that chronicles the life and themes of the  iconic musical, Fiddler on the Roof,  is essential to the understanding of why the story of Tevye the milkman is reborn again and again as beloved entertainment and cultural touchstone the world over. Audience Award, Toronto Jewish Film Fest 2019
View the trailer

Love In Suspenders
Israel 2019; Hebrew with English subtitles; 79 minutes
When an absent-minded widow accidentally hits a 70-year-old widower with her car, the last thing on her mind is love and romance. The two fall in love, but will their budding relationship survive the scrutiny of their children? A charming romantic comedy for the young and young at heart.
View the trailer

Shepherd: The Story of a Jewish Dog
Hungary–USA 2019; English; 93 minutes
Kaleb, a beloved German Shepherd, is separated from his Jewish family when the Nuremberg Laws are enacted in Second World War Berlin. He is adopted by an SS Officer who trains him to attack and round up Jews at a concentration camp. His original master, a young boy named Joshua, arrives as a prisoner and boy and dog escape together.
View the trailer

Upside Down Tree
Israel 2018; Hebrew with English subtitles; 73 minutes
Eva, a Jewish girl orphaned during the Second World War, is raised by an Ukrainian couple. After a mysterious woman presents herself as the child’s mother, Eva eventually decides to join her mother on a journey to Israel.
View the trailer

Thou Shalt Not Hate
Italy Poland 2020; Italian with English subtitles; 96 minutes
A split-second decision at a traffic accident triggers repercussions for a Jewish surgeon and a neo-Nazi’s daughter, in this gripping, potent drama. Simone, a Holocaust survivor’s son, rushes to the scene of a hit-and-run. But when he sees a swastika tattoo on the victim’s chest, he leaves the gravely wounded man to his fate. Wracked with guilt, the anguished doctor confronts the ethics of his choice, and bonds with the victim’s daughter Marcia, embroiling himself in greater conflict.
View the trailer

The Festival will also feature two Zoom Q&As moderated by The Westdale’s Fred Fuchs. Tickets are $12.50 per film and can be purchased through jewishhamilton.org. For more information and to purchase tickets click here.