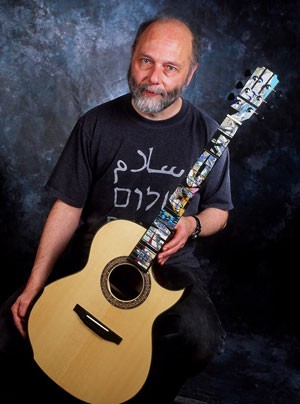 Social activist, singer-songwriter, author and world-renowned guitar maker, Grit Laskin, was among the most recent recipients of an Order of Canada.  Laskin, who was born and raised in Hamilton, modestly refers to himself as a "problem solver," whose life experience has taught him that "one person can change things." Laskin's advocacy work is primarily but not exclusively directed to the realm of Canadian folk music. Laskin is a game changer whose frequent response to what he sees as a problem is to create an organization that addresses it.   In 1996, he co-founded the Canadian folk music label Borealis, in response to Canadian artists being forced to record their music in the United States. In 2005, frustrated by the Junos awarding a mere two awards under the folk umbrella, Laskin founded the Canadian Folk Music Awards, now in its eighth successful year.  Laskin's professional success has come about as a result of his hand-crafted, custom-built guitars, that are famous for both their ergonomic innovations and beautiful inlay work.

QUICK FACTS:
William Laskin was born in 1953 on the Hamilton mountain to Morris and Laila Laskin. From the age of 9, Laskin attended Camp Ramah, where he got the nickname "Grit" and learned that he loved to sing.

The Laskin family were long-time members of Beth Jacob Synagogue.

Laskin left home age the age of 17 to pursue a career in folk music and acoustic guitar making.

Laskin is one of the coordinators of Muskoka's Woods Music And Dance Camp, Canada's longest-running adult folk music camp.

Laskin originated two cutting edge guitar innovations: the built-in "Armrest"  and "Ribrest" edge beveling, which have been copied around the world.

Among the many artists who play a William Laskin guitar are k.d.lang, Jesse Cook, and the late Stan Rogers.  The Museum Of Civilization has four Laskin guitars in its permanent collection.

On where it all began

"The Laskin family, both when I was young and when my father remarried ... was always a positive experience ...We all love each others' company ... My father Morris who had Career Girl womens' wear in downtown Hamilton for years and years ... was a gentle man. He wouldn't even kill a bug if it got in the house."

"One memory I have of my bar mitzvah was that I started singing my haftarah at too high a pitch and I stayed with it but out of the corner of my eye I saw the cantor look over at the rabbi and roll his eyes ... but I plowed on at a pitch that could have broken glass."

On what makes him tick

"You just don't say, 'Oh that's terrible or how will we ever fix that or that's too difficult to change ... I love a righteous battle."

"I always do original art on each guitar, drawing on a theme of import to the customer - it not only creates another personal layer to this instrument that's being tailored to them, it becomes a vehicle for their creativity ..."

"I feel lucky every day to have stumbled into a field that still makes me happy."