Ariel Shaffir talks The Interview, his local roots and working with Seth Rogen 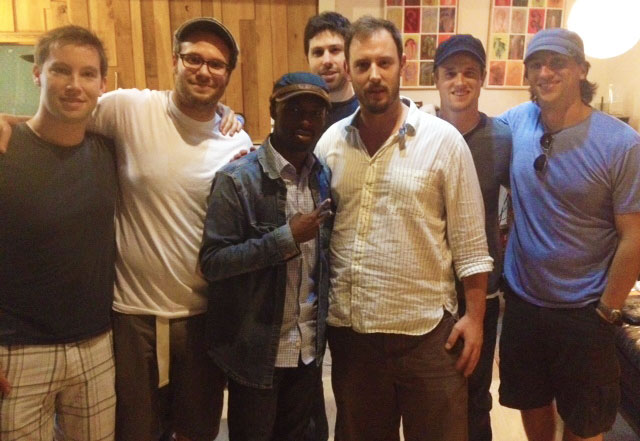 After terrorist threats and cyberattacks linked to North Korea, then a cancellation that drew criticism from President Obama, Hamilton-born Ariel Shaffir is happy The Interview is finally being released.

Shaffir, an executive producer of the film starring Seth Rogen and James Franco, didn’t expect the political comedy to spark such a firestorm of controversy.

“The basic idea was a celebrity journalist gets an interview with a guy who the United States would want to assassinate, and the CIA recruits him to do it,” he recalls. “It wasn’t Kim Jong-un originally. It just became that over time. Originally it was the father, actually, and then he died.”

The American government accuses North Korea, which the film lampoons, of sponsoring the November cyberattack on Sony that led to the release of reams of private data. The hackers demanded Sony shelve the film, threatening an attack similar to September 11. After major North American theater chains refused to screen the film, Sony canceled its scheduled December 25 release.

Following widespread criticism, including a rebuke from President Obama, Sony authorized a limited theatrical release on Christmas Day. The film was also released to online distributors such as Google Play and YouTube.

“It was a conscious decision to make a bold comedy and do something original, and after [the 2013 post-apocalyptic comedy] This Is the End, to up the stakes in terms of how far we could push the envelope,” Shaffir comments.

That being said, “No one thought that it would get this huge, where the President is commenting about it and Sony’s getting hacked.”

The story of how a young Hamiltonian became executive producer of one of the most controversial movies of all time begins, as so much of human history does, in Israel.

Shaffir met a then-unknown Seth Rogen on a camp trip to the Holy Land in 1998. Both their camps were affiliated with Habonim Dror, the Labour Zionist youth movement. He later befriended Rogen’s writing partner, Evan Goldberg, at McGill University.

“I went to law school and I was on the path to becoming a lawyer. I started writing in undergrad at McGill. My mindset was if it happens, it happens, it probably won’t and if it doesn’t that’s fine. I was lucky enough to have a screenplay [Camp Sawyer] purchased when I was in law school and then it all became a little more attainable and real.”

“I probably started focusing more on writing and less on law school when I was still in law school,” he says, adding “I still did fine and graduated.”

“Once Seth started to become really successful and Evan moved out to LA, Evan suggested that Kyle [Hunter], my writing partner, and I continue writing and work for him.”

After twice being rejected for a visa, Shaffir moved to LA four years ago. In addition to The Interview, he’s worked as executive producer of This Is the End and associate producer of Goon and 50/50.

As an executive producer, Shaffir's chief responsibility is to workshop the script. He reads every draft, gives notes and writes scenes and alternate lines and jokes.

“We film lots of different jokes and even versions of each scene so that in post-production, we have options to choose from when editing the movie,” Shaffir says. “During post-production I watch all the cuts of the movie and give notes and help with music choices.”

Shaffir, Rogen and the rest of the team at production company Point Grey Pictures are a close-knit creative unit. “We’re all really tight,” Shaffir says. “We’re all respectful of each other and it’s very collaborative. It’s a great place to work.”

“We all sit around as a group before a script is ever written and just talk about what the movie should be about. We start very generally figuring out what that is, and then start talking about funny ideas and funny scenes. Usually we create an outline that becomes more and more specific as we go along. And then someone writes a first draft.”

“There’s an R-rated animated movie called Sausage Party that we’ve been writing for probably seven years now. And it’s probably been through close to fifty drafts. You write, you send it out to other writers, you get notes, you revise, notes, revise, notes, revise…” he says of the creative process. “Even when you’re shooting the movie, you’re revising the scenes of the day as you go along.”

“The best idea wins,” he adds. “It doesn’t matter who comes up with it.”

Camp continues to create unexpected connections for Shaffir. “I met Sacha Baron Cohen. He went to a Habonim Dror camp in England and he was very excited about it and wanted to sing Habonim Dror songs. It was hilarious,” he recalls.

Asked about future ambitions, Shaffir mentions music. “I’d like to one day cross over into music in some facet, probably in filmmaking,” he says. “I wrote a gospel song for This Is the End, which was a very cool experience.”

Shaffir still attends Hamilton’s Adas Israel Synagogue over the holidays, where as a boy he was a member of the choir. He also jams with friends from Camp Gesher in Toronto, among them fellow Hamilton Hebrew Academy graduates. Shaffir, who is married with one young boy and another on the way, hopes to return to Canada when his children are school-aged.

“My roots are firmly planted,” he says, even as his work continues to reach across the globe—from Hamilton to North Korea.