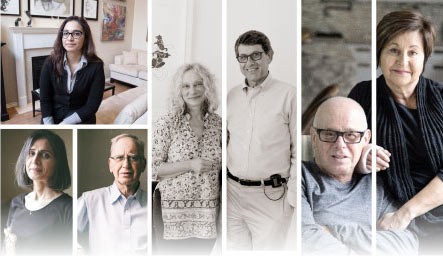 To mark Canada’s 150th year, the Rose and Phil Rosenshein Museum at Beth Jacob Synagogue is presenting an exhibit featuring the stories of eight Jewish individuals or families who came to Canada after 1975, and subsequently settled in Hamilton.

Their countries of origin include the former Soviet Union, France, South Africa, Turkey, Poland, Honduras, and Iraqi Kurdistan. The grand opening of Welcome to Canada: Jewish Immigrant Stories of Hamilton, will take place Sunday, Oct. 22, 2017, from 10:30 a.m. until noon.

“Hamilton, like Canada itself, has a rich history of immigration, and Hamilton’s Jewish community is part of this history,” said Wendy Schneider, head of the volunteer committee that planned the exhibit, with the help of Toronto-based curator Emily Horne. “Each story that we’ve highlighted is unique, and together they show the diversity of our community.”

Other committee members include Simone Rotstein, Hope Kamin, Ralph Bloch and Elissa Press. The project received support from the City of Hamilton’s Canada 150 Projects and Events Funding Program and from Beth Jacob Synagogue.

The idea for an exhibit about Jewish immigration arose out of a desire to highlight the commonalities of the immigrant experience at a time when millions of displaced people around the world are desperately seeking refuge from conflict and uncertainty.

“The immigrant experience is something with which Jews naturally identify,” Schneider said. “Many of our parents and grandparents came to this country at the turn of the last century fleeing pogroms in Eastern Europe. Many Holocaust survivors, lucky to have gained entry to Canada, settled in Hamilton. Our goal, in this exhibit, was to showcase the stories of our community’s more recent arrivals.”

The opening will include a video presentation of the subjects of the exhibit speaking of their immigrant experiences, followed by an interactive discussion and a tour of the exhibit itself. People who attend the exhibit will be able to share their own stories about their immigrant experiences, using writing materials that will be available. Beth Jacob’s Hebrew School will hold a special family program that morning, as well,  on the theme of immigration.

For more information or to RSVP, contact the Beth Jacob Synagogue office at office@bethjacobsynagogue.ca.