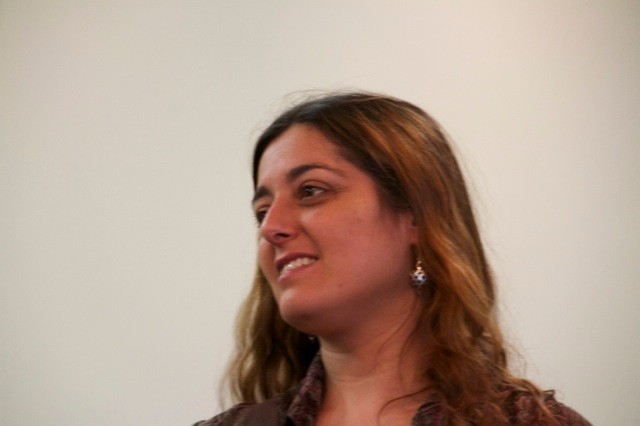 In 2000, the United Nations General Assembly declared June 20 to be World Refugee Day. To help raise awareness about the challenges faced by refugees in Hamilton, Israeli-born art therapist Hana Pinthus presented her work at the Central Library's Gallery 4 last June.

In 2003, Pinthus came to Canada as an immigrant, not a refugee, but her art reflects the uprooted feeling that immigrants, refugees and indeed all people at one time or another share. "The sense that you're not alone, that there's someone else who shares the same experience, is strengthening for the viewer," she says. Pinthus recalls a woman who viewed her art commenting that "my daughter is in Israel now, and I'm sure she's feeling like this."

Working for SISO (Settlement and Integration Services Organization) Hamilton and the Community Child Abuse Council, Pinthus encouraged refugees to express themselves artistically. "When people want to talk about their trauma and their perception of self, often they don't have the words," she says, but "art can help with the expression of feelings and thoughts that are blocked."

In the art of refugees, Pinthus observed symbols of dislocation and longing similar to those found in her own work. For example, she says, "The palm tree was a strong symbol for many people who, like myself, have come from the Middle East," and are adjusting not just to a new culture, but to a new climate.

As a native Israeli, Pinthus shared similar symbols and memories with Middle Eastern refugees, but also had to confront divisive prejudices. "Many of the refugees from Iraq would look at me and say, "Oh, you look like us, you understand us, where are you from?" Pinthus recalls. "They would change colours" when she told them "I'm from Israel, and I'm here to help you." She was often the first Israeli and the first Jew they had met.

Yet ultimately, Pinthus says, "I established wonderful relationships with them. It was a wonderful opportunity to bridge the gap. No matter where people come from, they are people. This is how I approached them, and this is how they approached me. I never had any difficulty doing my work because of that (being Israeli)."

Part of Pinthus's desire to work with refugees stems from her Jewish heritage. "We have a history of being refugees, and I think we have a duty to assist other refugees, because we've been there, we know how difficult it is to be rejected and to have no home. And we know how refugees can change their lives."

Pinthus has contributed her artistic talents to the local Jewish community, facilitating an art activity at a women's Seder fundraiser, designing a mosaic for Temple Anshe Sholom, designing the logo for Beth Jacob Synagogue and participating in the Working Family Stories and Treasures of the Hamilton Jewish Community project. She is currently part of the O-Ma-Noot committee, which manages the art gallery at Beth Jacob.

Pinthus's history of service shows that Jewish volunteerism and broader community activism are not mutually exclusive, but rather complementary. She says "it's absurd to reach out to other communities when you don't reach out to your own first." Her vision is that "the Jewish community in Hamilton will do more things together, and then together, reach out to different communities."