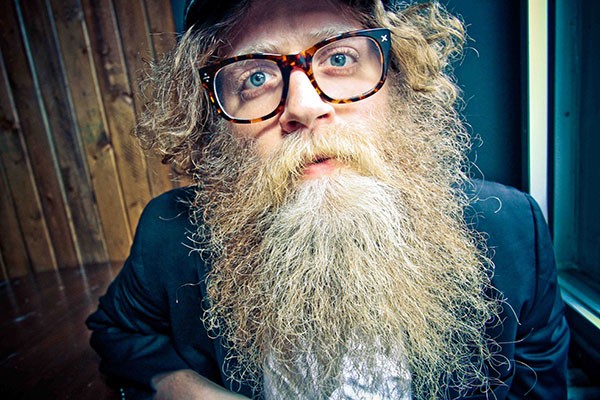 No matter where he happens to be in the world, with an international touring schedule that, in addition to cities across Canada, includes Australia (where he is hugely popular), Ireland or the UK’s renowned Glastonbury Festival, Ben Caplan always tries to make it to his parents’ home for Passover. That’s where the Hamilton Jewish News caught up with him last year after catching one of his electrifying performances at a downtown Hamilton club. Caplan, whose parents, Marvin and Judi Caplan were stalwart Beth Jacob members, and who himself was president of the Hamilton chapter of United Synagogue Youth (USY), attended the Hamilton Hebrew Academy from the age of 3 until Grade 8. He counts Jewish educational icons like Beth Jacob’s Rabbi Silverman and Cantor Bercovici, and the Hamilton Hebrew Academy’s Rabbi Eisenstein and Rivka Shaffir as early influences. Below, Caplan reflects on growing up Jewish in Hamilton and on the mysterious ways in which Jewish musical influences began to appear in his music.

How did growing up in a small Jewish community influence you?

It gave me a warm little nest to develop as a person within, (in that)  the HHA and Beth Jacob Synagogue both provided me access to wonderful experiences of Jewish pride and Jewish learning...  all of which have informed my personal philosophy as a contemporary Jewish person. After Grade 6,  I was at the Hamilton Hebrew Academy (HHA) from 9 a.m. until 4:30 p.m five days a week so they got a big chunk of my time and then I was at the Beth Jacob every Shabbes and would go regularly for Shacharit (morning services) before I went to school. I think I went to the HHA to learn about Judaism and I went to synagogue to practice Judaism... They were both different worlds. I’m grateful to have had access to all those perspectives and to have had a wonderful education that has served me well in my secular life as well.

When did those Jewish influences begin to find expression in your music?

When I started singing and performing, (my music) never really had Jewish elements.  While it was something I loved, it was a different world for me. One thing was Judaism, and the other thing was music and they didn’t really touch in my mind. But I sort of had an epiphany moment when I had a quick stopover in Antwerp while I was travelling in Europe in 2007. Playing in front of one of the large cathedrals was this sort of Balkan-style eastern European brass band. I immediately recognized the melodies as being  of the same kinds of sounds as the Jewish music that I experienced growing up. It was the first time that I realized that these kinds of melodies, scales and musicality was something that had an artistic musical expression and a home within that part of my life instead of just being relegated to shul.

How did you begin to incorporate Jewish sensibility into your songwriting?

I think that the melodies that were already present within me began to become awakened and I started writing songs using what I now understand to be the harmonic minor scale. Jews, over history, absorbed the musical traditions of the places where they were, so klezmer uses the same melodic devices as other folk music from Eastern Europe, whether it’s Romanian or Balkan or any of these different styles. It would probably be more accurate to say that I’m most interested in Eastern European folk music of which klezmer is one of the rich tapestries that’s part of that world. Jewish music and the liturgy were my gateway into that folk tradition.

How does your Judaism find expression in your life and art?

The question for me is how can we be good to other people? How can we go to sleep every day and wake up every day feeling content and feeling happy. I think that insofar as Judaism helps me along that path it’s useful and I like feeling connected to a long history, culture and tradition. Judaism is full of little reminders to lead a good life and rack up things that one would be proud of at the end of the day and to avoid things that one would regret, waking up the next day. It’s nice to participate in the same tradition as my great-great grandfather — in my own way.