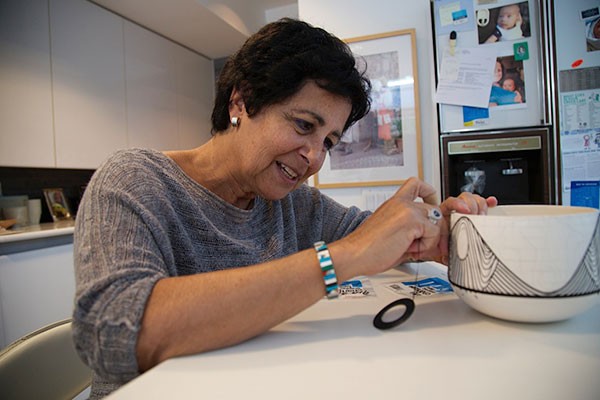 Carol Rossman was as surprised as anyone to discover, well into her 30s, that she had artistic talent. In those days, it was her clinical research on genetic lung disease for which she was known. But the Dundas raku artist’s first pottery classes at the Dundas Valley School of Art revealed gifts about which she had previously been completely unaware — a steady hand for throwing pots (the process of shaping clay on a potter’s wheel) and an eye for colour and design. But it was her methodical and scientific way of problem solving honed from years working as a medical researcher that has led to Rossman’s being acclaimed internationally as a pioneer of new raku techniques.

In November, the Carnegie Gallery in Dundas is hosting a solo show of Rossman’s raku pots, marking the first time her pottery will be available for purchase outside the London, Ontario gallery that has exclusive rights to her work.

The term “Raku” refers to a unique firing process where pieces are brought up to very high temperatures very quickly, then pulled from the kiln and placed in an air-tight metal container filled with combustable material like straw or sawdust. Upon contact with the vessel,  the material bursts into flames which quickly become starved for oxygen creating a smokey, carbon-rich “reduction” atmosphere that gives Raku pottery its very distinctive, one-of-a-kind character.

What sets Rossman’s work apart are her attempts to impose control on a medium known for its unpredictability. She does this by using her pots as a canvass upon which she “draws” her distinctive designs with thin black masking tape, and meticulously applying her glazes to the uncovered parts. During the firing process, she is constantly covering and uncovering until her glazes take on the colour variations she wants. It’s a technique that has taken her years to perfect.

Every artist needs a muse, or a source from which he or she draws inspiration. For Rossman, it is the American Southwest, a place she returns to again and again on annual trips with her husband to Arizona and for horseback riding trips in Utah. “A part of me needs to see it all the time,” she said.

Rossman’s pots are a paean to the timeless beauty and complex patterns of the red rock mesas and canyons of Arizona and Utah. Seeing them displayed in Rossman’s sunken living room amidst the photographs that inspired them, one feels immediately transported to another place.

In his book about her work, Jonathon Bancroft Snell describes Rossman’s work as “freeze framing moments in nature,” allowing the viewer to see things as they were at a particular moment before the erosion process transforms them into something else. Rossman herself, he writes, is a study in contrasts, a technician “both consumed with a rigorous attention to detail” and a spiritual being willing “to accept nature as it is.”  The scientist and the artist.