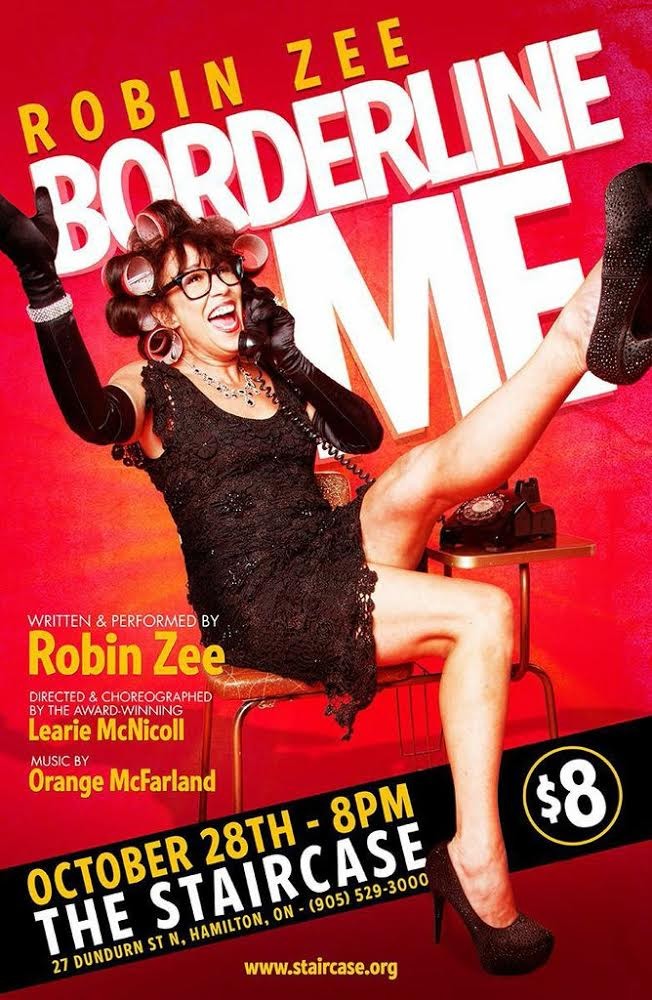 Robin Zee has quite a story to tell.

“After working in social services and telling my story,” Zee recounts, “people would say I should write a book. And I tried but I wasn’t very good at it. Then I went to see Shelley Marshall’s play Hold Mommy's Cigarette, and I thought, ‘Oh, that’s a way to tell your story.’”

Inspired, Zee did a 10-week solo theatre workshop in Toronto, where she learned to adapt her life to the stage. She hired a director and found a collaborator in musician Orange McFarland, resulting in eight sold-out shows at the 2014 Hamilton Fringe Festival. St. Joseph’s Hospital also invited her to perform for their psychiatric ward.

The show, Borderline Me, incorporates monologue, movement, incidental music and humour to express her life experience and struggles with mental illness. She also uses a post-show Q and A session to open up a dialogue with the audience.

“I’ve had people come to the show three, four, five or six times. People have been woven into my tapestry of life,” Zee says. Born in Cornwall in 1957, and a Hamilton resident since 2006 by way of Kensington Market and Montreal, Zee counts many new friends she’s made through her performances.

“I met a wonderful woman during the blues festival in Westdale,” Zee recalls. “We got into a conversation and I gave her my Fringe card, and she looked at the title and said, ‘Is that what I think it is?’ I said, ‘Yeah.’ And she said, ‘Oh, me too!’ And she came to see the show.”

“A lot of this stuff happens in secrecy. I wanted to accumulate witnesses for my own well-being,” Zee says. “But I also saw that it was inspiring other people. My intention was not shock value. My message is you can go through this and come out the other end.”

Zee describes the play as a balance between the light and the dark, and she is careful not to overwhelm the audience with disturbing details. An outside observer might hesitate to use the term, but Zee calls Borderline Me “a zany journey.”

She ends the play by discussing future travel plans, and hope is the driving force of her story—both on and off the stage. As a mother, counsellor, artist and active member of Hamilton’s Jewish community, she’s a living example that a troubled past doesn’t have to define the future.

Through Borderline Me, Zee hopes to dissolve the stigma that surrounds mental illness and emotional trauma. “It’s hard enough living with mental health issues. The stigma only makes it worse. Everybody’s idea of normal is different. People don’t always wear their issues, but we all have them. Whether it’s a death, a miscarriage or a rape, we all have our shtick. It’s not always as it appears.”

Zee is currently working on expanding her now–20-minute show for the next Fringe Festival. She’s looking into performing in other locations, including Florida and the UK. A partnership with McMaster University is also in the works. “I’d like to perform for as long I can. Maybe when I’m 80 I’ll still be up there performing.”